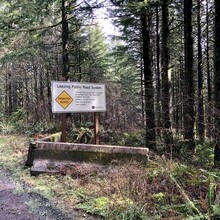 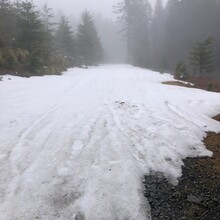 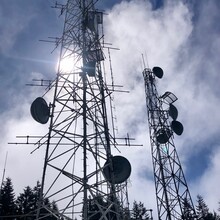 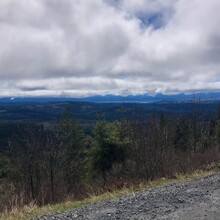 This was the first female attempt of this route - I’m far from the fastest woman in the PNW so have to be the first!  It was an unsupported effort – I carried 2L of water (drank 1.5L), 3 espresso flavor Gu gels (forced down 2.5), and a backup power bank and charging cable because I don’t trust my iPhone 8 battery and don’t run with a watch (didn’t need it).  It was raining when I left Portland this morning but had stopped by the time I started, and was mostly cloudy during the run until the sun came out for the last six miles.  I listened to music on the forest roads, but it didn’t feel safe on the windy paved roads even though I could have really used some Cardi B the last two miles.

A huge thank you to Bryan Beel for creating this route.  I found it easy to break up into sections mentally and greatly enjoyed the forest roads and intermittent views between the clouds.  The description he submitted was incredibly helpful in terms of what to expect (although I still almost quit on the NE Livingston Road climb at the beginning) and he deserves major bonus points for creating a route that ends somewhere to buy cold drinks and snacks!

I forgot to add that my splits were 2:02:04 for the ascent and 1:27:06 for the descent.  The last half mile of road approaching the summit was covered in large patches of snow and the flat summit area around the towers was solid snow, fortunately fairly compacted.