This is an interesting paved/dirt road climb from Fern Prairie Market in Camas, WA (on the edge of the Portland Metro area) to the summit of Larch Mountain, which is the highest peak in Clark County, WA.  The run is just over 10 miles each way, making for a 20+-mile roundtrip.

Given the length, this is fairly approachable as an unsupported run, and has the benefit of reaching a notable landmark (Clark County's highest peak).  It is also a rare, road-oriented FKT route (at least around these parts), because it travels over both paved roads (the lower 4.5 miles in each direction) and packed/rocky dirt roads (the remainder).  As such, it's possible for someone to go for either an unsupported and challenging effort (as I did), a self-supported run (caching supplies along the road), or a shot at a maximal effort with little baggage and full support.  This appears to make the route relatively unique among those in the region.  In addition, the terrain is varied, capturing both long, uphill grinds, and relatively flat/rolling terrain where you can let loose (especially on the return trip, there are real chances to move fast).

The route itself begins at Fern Prairie Market, which is basically the point at which you unofficially leave Camas, WA, and head into the surrounding countryside.  The route immediately begins climbing east on NE 19th Street, and then ascends a steeper hill after a left on NE 277th Avenue, heading north.  The road changes names a couple times before reaching the intersection with NE 292nd Avenue at the two-mile mark.  Just before the three-mile mark, there's a right turn onto NE Livingston Road, and what was rolling becomes a significant, lengthy climb (600 feet in just over a mile).  The road becomes essentially flat for about two miles, roughly when it enters Yacolt Burn State Forest as L-1000S, before climbing again to the 7.6-mile mark, at the junction of L-1000S and L-1500.  The climb up L-1500, to the east is then a tough grind, gaining just over 1500 feet in 2.7 miles to the peak of Larch Mountain, as the surface varies from smooth, packed gravel to very rocky and loose forest maintenance road.  Depending on the weather, one can run into the clouds (as I did), or be rewarded with spectacular long-distance views to the southeast and west, toward Mt. Hood, Mt. Jefferson, Portland, Oregon, and the Oregon Coast Range. 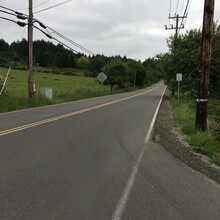 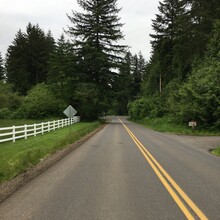 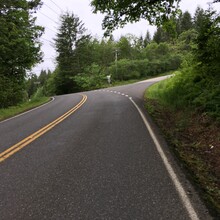 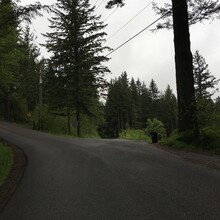 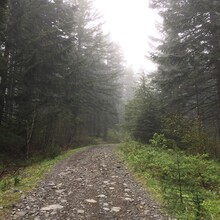 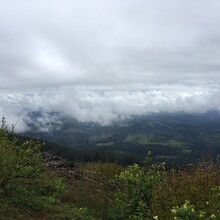 The spot on the map reflects the Oregon side Larch mountain but the FKT is for the Washington one. Might want to update.