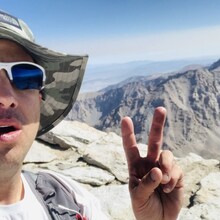 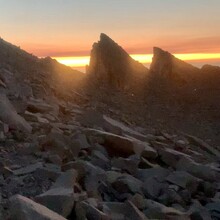 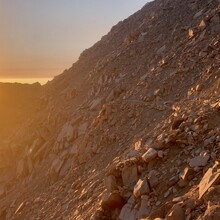 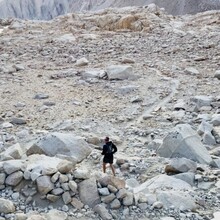 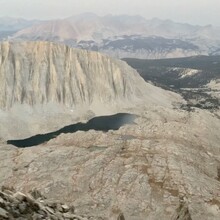 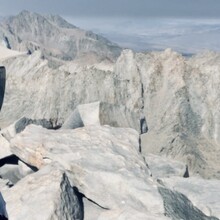 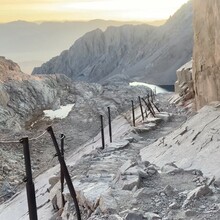 In my quest to summit Mt. Whitney every month of 2021, I decided to attempt the Whitney Trail Double in October.  My September ascent was 10 day prior, so my legs felt primed and ready to tackle the Whitney Trail twice in one day.  I started from the portal at 2am, and held a steady pace to the summit in about four hours.  It was cold after trailcrest, so I threw on my houdini jacket and pushed to the summit where I turned right around to start my run back to the portal.  The sunrise was absolutely spectacular, and once the sun hit I warmed up.  I made it back to my car in 6 hours 55 minutes, where I refilled my 2L hydration pouch and added some more gels to my pack.  My nutrition plan the entire day was tailwind, with honey stinger waffles and assorted gels roughly every 30 minutes, with an occasional nut butter.  At the halfway, I switched shoes and socks and had an energy drink with a banana, then I was off for my second ascent.  While I did carry an ultralight microfilter, I didn’t end up using it as I found 2L of liquid was sufficient for each ascent (4L total in 14 hours).

My uphill legs felt surprisingly fresh as I started the second lap, likely because the previous 10 miles were all downill and I was ready to go up again.  The energy drink had me moving pretty fast and feeling good for the second half.  I typically lay off the caffeine in daily life so that it can really kick in for races and climbs.  The temperatures were a little warm towards the middle of the climb, but certainly not to the detriment of the climbers on this day.  I was able to stay on the projected 7 hour pace until trailcrest, at which point I began a steady death march towards my second summit.  In my mind, I knew that if I could just get to the top, I’d be able to turn around and run the entire way back to the finish.  The run down was as enjoyable of a time as I’ve had on this mountain, with the final three miles of such pristine trail I was really moving at the end and feeling great.

The best moments of the day were all the positive interactions with the other hikers.  Many folks were cheering me on as I greeted them downhill and anticipated seeing them several hours later.  Everyone is out there pushing their limits regardless of what their goals are and seeing everyone accomplish this was quite a sight to see.