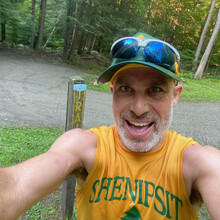 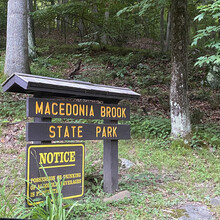 This was my first run on a day filled with FKT action. Check out the full report.

After I dropped Debbie Livingston and Laura Becker off at the border for the beginning of the Connecticut section of the Appalachian Trail E2E Run, I drove to Macedonia Brook State Park. It was my first  time there. I did the loop trail, which is also part of CFPA’s Blue-Blazed Hiking Trail system.

It’s 10 kilometers of rugged, rocky, and steep climbing and descending. There are short runnable sections in between sections of tough singletrack. I took Lee-Stuart Evans’ advice and went counter-clockwise. It was safer to climb the worst of the rocks rather than descend them. At the top of Cobble Mountain, I had a spectacular view as the clouds were below me. I was running all out but still wanted to stop and take a photo. The problem was that my iPhone was stuck in the front pouch of my hydration belt. I gave the zipper a tug and it broke off leaving my iPhone trapped. I eventually got it out, using the pliers on my Leatherman, but that wasn’t until I was back at the car.

Thankfully, a few miles away on the NY side of the border (where the AT briefly curls), Debbie and Laura were ascending a different hill while experiencing the same clouds. They got a photo of the early morning beauty.