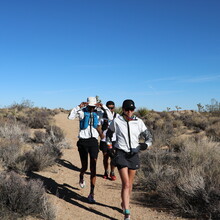 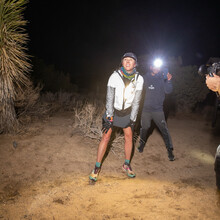 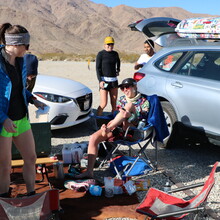 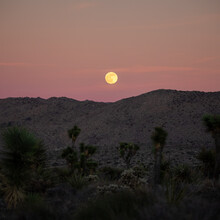 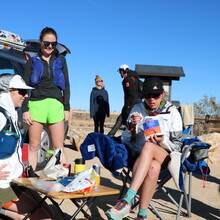 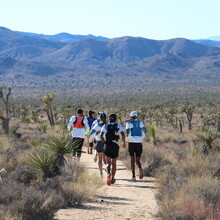 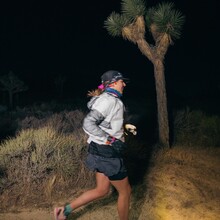 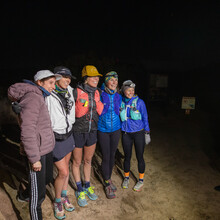 The edge was hit sooner than usual on this run, and then hit and pushed through on repeat for 41 miles. Despite how annoying that feeling is, I'm proud that I worked my way through it with the support of some amazing friends. The trail community is like no other!

I started at 4:11am, only a few minutes behind schedule. If I were to do this again, I think I would start at 10:00am. Why not let yourself sleep in and ease into the run with a little sunshine and natural warmth? That being said, it was a frigid start. When I woke up in my car camping setup the thermostat read 25 degrees Fahrenheit. I can only imagine I was burning way more calories than I was factoring in. Watching the sun rise as I neared Juniper Flats was exciting. I was diligently consuming Spring Energy gels every 35 minutes thanks to a nutrition timer on my COROS watch. I switched out pacers at Juniper Flats and carried on to what I envisioned being the happiest part of the trek. It was! A sandy gradual downhill that I knew would be a bit of a slog on the way back. At mile 32 a gel hit the wrong way and didn't stay down. I wasn't too worried at this time, I'd be at the halfway point soon enough and could reboot myself with Mountain House mac n' cheese and whatever else the crew threw my way.

Unfortunately, eating didn't get easier. I'm not sure that I even got a mile in from the turnaround when my stomach rid itself of the Gatorade I was just enjoying. Tasted the same both ways. Crazy! This forced me to walk for a while. I was hoping that by giving my body a chance to chill, it would eventually return back to some semblance of normal. And really, this is how the run went for the rest of the day into the night.

I had an amazing crew with me for the 6.5 miles from Geology Tour Road to Juniper Flats, I was able to actually run parts of that segment into Juniper, laughing along the way. I started feeling optimistic about the final 18.5 until I was forced to eat again... which just kept failing. I took my time at this aid station, again, in an effort to regulate things. The final push was slow and pretty darn cold. My team made me keep eating, which often I needed to do sitting down in order to not gag it right back up. The downhills were a joy. As was the delightful full moon rising over the Joshua Trees and the little patches of snow sparkling in the moonlight.

I really wanted to finish this run somewhere in the 12 to 14 hour range, it is definitely doable. It's a gorgeous trail with magical desert life everywhere you look. Massive kudos to the friends that wanted to join me on this wild little adventure and for reminding me that if it was easy, everyone would do it! I am genuinely looking forward to speaking with the next female who puts down an out and back effort on this glorious traverse.