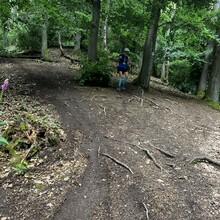 It was another long weekend and we decided to run in Weinheim in preparation of a trail race in July that we signed up for (some of us do regret that rash decision now). As there was an FKT route for Weinheim already, we decided to give that a try and finish it off with a “cool down” loop into Gorxheimer Tal, which turned out to be quite sweaty. As we wanted to do the loop into Gorxheimer Tal, too (it’s part of the trail race!), we decided to park our car at Wanderparkplatz Wachenburg, rather than in Weinheim city centre. The Strava verification link has the FKT route as the first lap and the cool down run as the second lap.

It had rained a lot during the night and was still quite cool when we set off. We had a few navigation issues (again!), but managed to do the loop without too many involuntary additions. This should definitely be run with a gpx track though. We especially enjoyed the section through Exotenwald - I’d never been there, even though we lived in Heidelberg for many years. We’ll definitely come back for that one day when we have a bit more time! Easy-going forest paths and small single trails made for a great route overall and we really enjoyed the run. We even saw a deer (that was on the second part though). Unfortunately, we were a bit too stinky and sweaty to top it off with a beer and fries at Woinemer Hausbrauerei - again, we’ll be back another time! :)