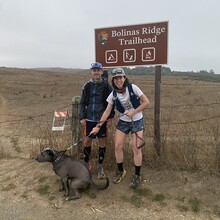 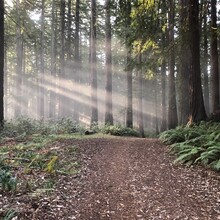 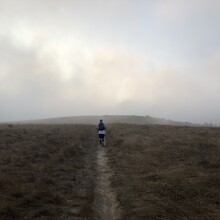 We had been planning to do this route earlier but the fire near bye put a hamper on that. All the races had been canceled so for Carolyn's first 50k we decided on this adventure. We had a friend drop us off at the trailhead and took off in the fog, thru the cows and into the unknown. The bridge at the intersection of Deer Park Fire RD/Miwok had been finally repaired after many years so use that way. Its roughly the same distance but not able to map it out that way yet. Started this adventure as unsupported but ended having a couple of friends run the last couple of miles with us. For future runners if you do this route it does get very hot when you head into the Marin headlands so be prepared. The best part is the final descent toward the Golden Gate Bridge with epic views that don't get old if you live here and breath taking for those out of town.