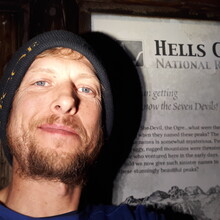 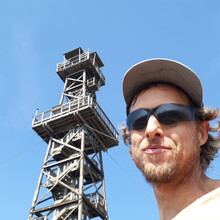 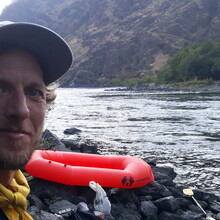 Have you ever wondered what it'd be like to walk from rim to rim, then back again, across the deepest river gorge in North America? Probably not, but let me tell you, it's scary, at least that's how it was for me. But it wasn't the 50.26 miles of hiking that concerned me, it was a bridgeless crossing of the Snake River, midway through.

Just twelve days earlier, I had successfully completed this route in 23 hours, 47 minutes, 47 seconds; however, my time was not officially recognized since I was shuttled across the river by a jet boat, on my way back. Having already swam the first side of this crossing, I knew that I didn't want to do it again. Solution? A portable packraft.

On October 2, 2020, I departed from the Windy Point Trailhead at 2:15am Oregon time and entered Hells Canyon Wilderness. Besides a wide range of updates and improvements to my strategy and gear, I had much better weather conditions and a full moon overhead. By the time I left the far side of the first crossing, I was an hour ahead of my previous time.

At Hat Point, the views were obscured by smoke from a nearby fire. I summitted the lookout tower then without sitting down, began heading back.

Despite having a packraft, the return crossing was still scary. The water's moving fast here, with rapids immediately downstream. During my first attempt, a jet boat came by as I was scouting for the best line. Standing there in my underwear on the banks of this mighty river in the middle of a giant wilderness, I was visibly shook and the driver gave me a ride. This time, I paddled across and made the eddy I was aiming for without a hitch. On the east side of the canyon once again, I was now an hour and a half ahead of my previous time.

The climb back up to Windy Point is much bigger than the one up to Hat Point, as there are several ups and downs on this side. The final hours, I was battling between being cold from catholic air and a strong breeze, and sweating from exerting harder than I ever have. By the top, I had lost some of my lead but got to enjoy the views, as the moon was casting shadows on the 7 Devils peaks. On my first crossing, I was ducking lightning and getting showered with sleet during this part.

All in all, I have to say this was the most challenging single day hike I've ever done, especially when considering the poison ivy and deadfall that I had to navigate past, on top of the 2 river crossings and 18,283 feet of elevation gained. While these numbers are indeed impressive, this simple yet dangerous feat begs the question, why do something like this in the first place? To face your fears, find your limits, and grow from the experience. After 2 successful crossings of this route, I can confidently say, I've done just that.