Location
Idaho, US
Oregon, US
Description

Hells Canyon Rim to Rim to Rim, from Windy Saddle Campground (Idaho) down to the Snake River (swim across) climb up (on the Oregon side) to Hat Point, OR.

I have been able to find one account of this crossing by Mike James and Steve Graepel. Their write-up gives some details as 42 miles and 18,000 feet of gain. Their time was approx. 36 hours. They missed the river crossing (a swim) and had to stay the night out on the trail. there write up can be found here: trailrunnermag.com/people/740-go-to-hells-canyon 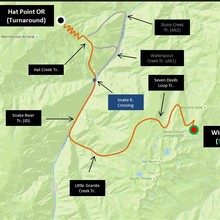 This route on the old FKT site
http://fastestknowntime.proboards.com/thread/1152/hells-canyon-r2r2r

50+ Masters Ironman athlete and my first training partner for ultra-endurance, Michael Rushton (look up his Ironman stats) and I will be attempting to be the first to take this RIM TO RIM TO RIM effort under the 24 hour mark on Saturday, October 5th, 2019. This is cathartic for me to reunite for an effort in the area of our old stomping grounds and my hometown Baker City...

The swim is going to be frigid after that little snow we just got yesterday. However, We are stoked for an epic go of it together. I was happy to have him as a first training partner in the ultraworld because he simply seems to relish in the suffering, which has influenced my development in the sport... and now in the alpine realm too.

We will have live spot tracking data (will post once set up)
We will each record on a wrist-based device as well.
We will also take geo-stamped photos at key locations.

I have launched my Youtube Channel after being prodded by friends and students (I am a teacher) and will attempt to put together a video for this effort (and will recap efforts on "Rainier Infinity Loop", "Cascades Trifecta", and "Oregon's 5 Highest" among others)

I will also post up to IG: @jasonhardrath, if there is any service.

It is going to be a busy October...

Here is the Live Tracking Link for the our Hell's Canyon Attempt
http://share.findmespot.com/shared/faces/viewspots.jsp?glId=0deWvLASgXt…

I got ahold of Peter, and we both agreed that the essence of this record is to cross the canyon, tag hat point, and return to the start...and that due to lack the state of the trails in the canyon that route finding is a part of the record...as such, our line of descent into the canyon (and back out) will not follow Peter's line.

Hey guys, good luck out there! I just started looking into this route for the coming summer; I'm very interested in hearing/seeing how the river crossing works out. I haven't done any river crossings as part of a run before, but have done some swift water activities in the past. Interested in seeing how to adapt those skills for fastpacking/trail running.

This looks like an amazing place to go, I'm very excited for you and to see your result. You're brave for trying it this time of year!

Had to DNF - Snow was drifted up to our knees in places and ankle to calf deep the rest of the time...

Stoked to see you guys gave this a shot, I’ve been really curious about this route. Did you take dry driggins down rather than granite creek like Pete? Also what way did you get up to hat point from the river? It looks like you just took hat creek trail up rather than venture to waterspout or sluice creek? How was that, heard it was super overgrown.

did you hit snow on both rims? I’d guess that the Oregon side had it worse after that epic February storm in September a couple weekends ago.

Ah never mind I looked at the tracking wrong I see now, looks like you got hung up before the bottom. Would still love to hear more, kudos on giving it a shot!

Yeah man, we decided it was unreasonable to continue with our pace being slowed so much by the snow and the temps predicted to drop into the 20s that night...it seemed too risky with the untried route and the swims... It looked like there are a few possible lines.
Definitely going to give it another run
cheers

On September 18, 2020, I successfully completed the scariest and most challenging hike I've ever attempted. My plan was to travel from rim to rim, then back again, across the deepest river gorge in North America - Hells Canyon. Mind you, there's no bridge across the Snake River here, but let's start from the top.

In staging for this hike, I arrived the night before and camped at Windy Saddle Trailhead, in Hells Canyon National Recreation Area. I wanted to start at 1am, but since this area is on the Mountain/Pacific time zone, my phone kept flipping between being on Oregon time and an hour ahead. Due to the nature of this crossing, the timing of my departure was critical. Unable to sleep, I set a timer instead. At 1:11am, I was off and running.

Like most wilderness areas, the perimeter trails were in good shape, however, once I reached the inner gorge, it was so overgrown, the trails dissapeared. Since I had GPS on my phone, that wasn't an issue. What concerned me, was the poison ivy they were covered in. I pushed through and stayed fully clothed.

At first light and 13 miles in, I reached the Snake River. It was big enough to float a barge down. As if possessed, I stuffed my things into a dry bag, tied it to my waist, then jumped in.

The river was deep and swift. I swam hard, but it felt like I was getting swept away, rather than getting closer to the other side.

Luckily, I caught the eddy I was aiming for and reached the far side, shivering and out of breath. Too cold to rest, I pushed on.

I was hoping for a clean trail up to Hat Point, but that wasn't the case. Soon enough, I was scrambling up a sheer and rocky hillside.

I saw no other hikers en route, only a herd of mountain goats near the top.

At Hat Point, I considered quitting due to my river experience, but the lack of anyone around, plus a massive commute to retrieve my car made the decision for me. I also figured the swim would be easier on the way back if I took a break before starting it.

The view from Hat Point was obscured by smoke. I summitted the tower then immediately began heading back.

After a 5,600ft foot decent, I was at the Snake River once again. I rested for half an hour then packed my food and clothes for the swim, wishing I'd brought my tent and sleeping bag.

Standing on the bank in my underwear, I was terrified. For another half an hour, I kept trying to go, ebbing & flowing between extreme confidence and a genuine concern for my life.

I was unsure about what to do. Then, to my surprise, a jetboat came screaming around the corner. As it was passing by, I flagged it down then gave the 20 or so passengers a hell of a show as he ferried me across.

Safely back on the east side, I was relieved and revived. Getting a ride was totally unexpected but much appreciated.

The mission was far from over though. I still needed to climb 7,000ft back up to Windy Saddle, and it was getting dark.

I pushed myself like never before and was making good time, up the wrong side canyon! After getting back on track, I continued fighting through poisonous brush.

About halfway up, it began raining. A cold sleety rain. My things were packed well, but near the end, my phone died and I needed to recharge it. I stopped beneath a tree and plugged in my portable power bank. Nothing! Upon closer investigation, I noticed that my charger's receiving hole was packed with sand. Frantically, and with frozen fingers, I cleaned it out with a safety pin from my first aid kit. After a few minutes of finagling, I got it to take.

I looked at the time, and despite all of the troubles of the day, I was still on pace to complete this feat in less than 24 hours.

The sleet continued, accompanied by lightning now. I jogged the final mile holding my phone to the charger under my jacket. When I reached the trailhead, I was soaking wet and shivering.

Understandably however, FKT does not recognize this time, as I got a ride across the river. Knowing this, I could've just as easily pretended like I'd swam back across, but that's not my style. They'll accept packrafting though, if that gives you any ideas what I'm browsing for today. 🤘🤣

Love that you already plan to go back and face this again.

Ha, fun, I see this has become a thing now. I attempted a variant of this in 2015, which involved climbing the He Devil: https://www.christofteuscher.com/aagaa/report-hells-canyon-traverse