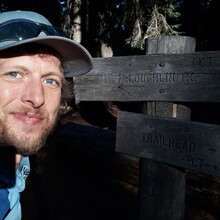 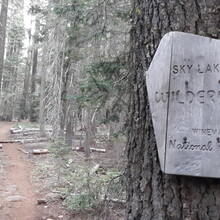 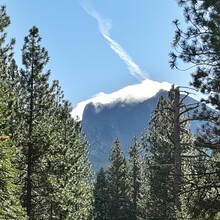 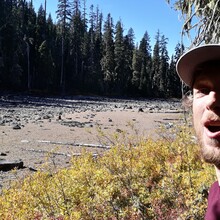 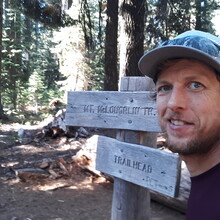 For this self-supported solo run, I completed a successful circumnavigation around Mt McLoughlin, then continued with the summit option afterwards. Before setting out, I pre-placed 6 small caches the night before, containing 16.9 oz bottles of water and snacks. This allowed me to run without having to carry much, although my collected trash had filled my cargo pockets to the point of being uncomfortable by the time I was finished. Arriving to this route, I camped just 0.2m from the trailhead then after a 1.4 mile sunrise approach hike to my starting point - at a junction with the summit spur, I set off at 8:45am. The weather was perfect, everywhere except for the summit that is, which had a thick lenticular cloud covering it. Thankfully, by the time I reached the top it had vanished. I was also thankful I'd stashed so much water. Both Twin Ponds and Summit Lake were dry. Only one of my caches had been disturbed, likely by a coyote, since I saw tracks nearby. Somehow, it was only dug up and not consumed. The water bottle however was laying directly on the white line marking the side of the road, still filled and cold to boot! With plenty of daylight left, I finished this loop then pounded a liter of orange juice before continuing on to the summit.