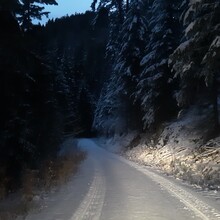 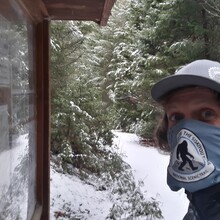 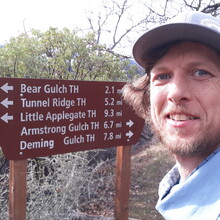 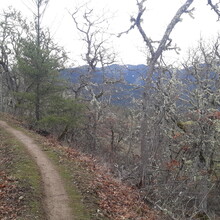 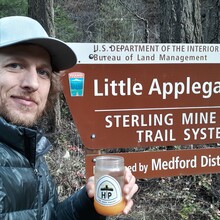 After a snowy approach to the Little Applegate TH, I stashed a small backpack with a change of clothes, food (packed in a quart-sized mason jar), water (2 Liters) and trekking poles then headed for Grub Gulch TH. As I passed by Deming TH, I place another .75 Liter bottle of water under a piece of loose bark. At 8:07am, I set off. Leaving Grub Gulch, the ground was completely covered in snow. By the time I reached the ditch though, it was gone. This effort was a challenge for me as I'm not much of a runner and thanks to graded switchbacks, this trail is essentially level. It was however, a scenic corridor that's worth repeating, which I did immediately after. No problems finding the route either. At mile 20, as Angela pointed out, the trail leaves the ditch to the left and is not overgrown, but will be if you keep following the ditch. Great trial, sweet views, and the fastest I've ever ran this far!

*Before attempting this route, I had placed third water bump at Armstrong Gulch, however, as I learned, the trail crossing at the trailhead is not the actual SMDT. That is met ~1/2 mile and a few hundred feet higher up the road. When I reached this road crossing during the effort and realized I was not at the right place, I descended and retrieved my cache, which included water and food (packed in a pint-sized mason jar) for my return. Thanks to a plethora of loose bark, I was able to replace my return cache in the correct place quickly. All in all, this was a 15 minute detour and the only mistake of the run.