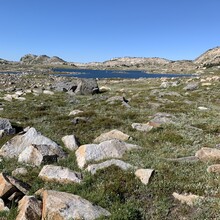 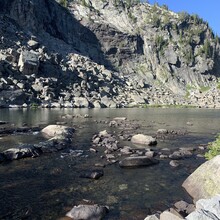 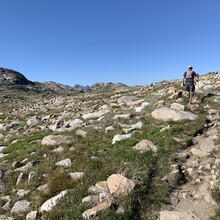 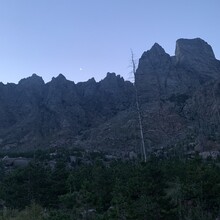 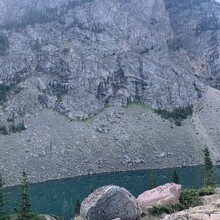 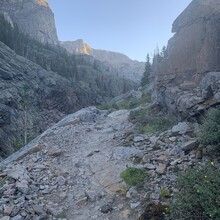 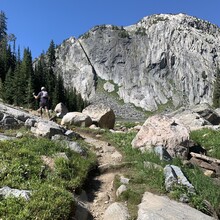 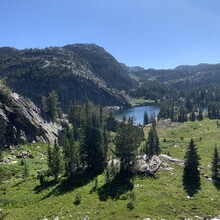 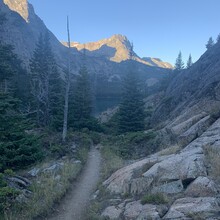 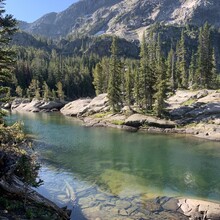 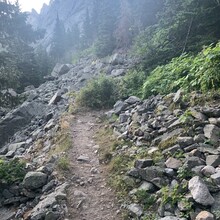 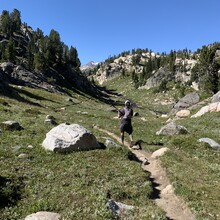 We got a 5:35 AM start after camping at the East Rosebud (ERB) trailhead. Had thoughts of this taking around 14 hours and beating the dark, but didn't quite pan out. We took enough nutrition to get us to Clark's Fork (CF) TH where we would be meeting up with a friend to resupply. We both took water bottles with built in filters to take advantage of the ample water stops along the way, which worked out great. The trek out to CFTH took around 7:15. Which was right around the time we were looking at. It had started to get pretty warm by then and I (Drew) had some nausea building up, so spent a bit more time at the trailhead than planned, but got mostly sorted out. Got our start back to ERB after about a half hour or so, around 7:55 hours into the effort at this point. It was now quite hot out and we mostly hiked our way up to fossil lake and I was still lagging a bit up until the descent back into ERB.  As we started to climb down I was able to catch up on calories and water and we were able to make up some time between miles 16-6. The last 6 miles were a grind and we were fighting to stay at the 15:30 pace we had battled back to, but my legs wouldn't let it happen and we took our final couple miles with headlamps on.

This was my second ultra and my first over 50k and Steven battled IT band/knee pain issues throughout having completed the Beaverhead 100k just a month ago. So while we had a goal of getting this FKT, we wanted to make sure we finished and enjoyed the day, and I'd say we did both. The Beaten path is a rocky, mildly technical trail that builds in difficulty the more you have to deal with it. Both of us had sore feet, sore legs, but strong spirits after completing. We're sure this is an FKT that could drop in time quickly as more people try it!