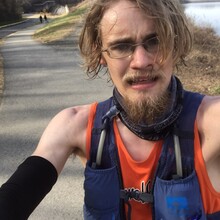 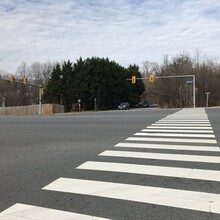 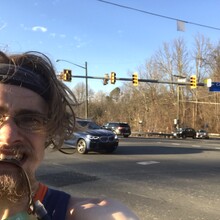 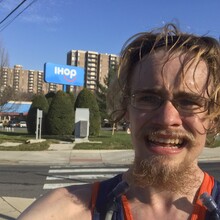 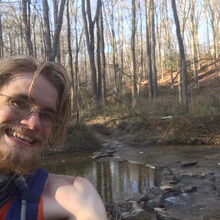 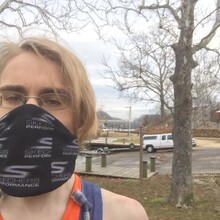 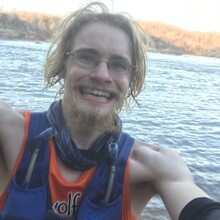 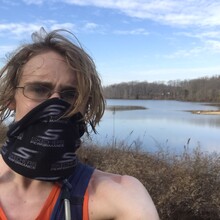 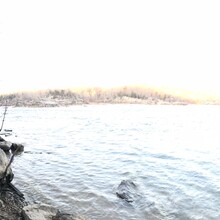 4:43:12 unsupported
Was super happy to finally reach the Potomac

Weather:
Mid-to-high fifties, cloudy. Calm winds. Great day for a run.
Trail condition was excellent, the northern fifteen miles turns into a muddy slip and slide when wet, but there hasn’t been much rain recently so the trail is dry and fast.

Plan:
Actually today was originally going to be recon of the southern 13 miles of the trail for an FKT attempt next weekend, but discovered this morning that the forecast is calling for 12 inches of snow on Wednesday, so had to go for the whole shebang today before the trail potentially gets snowed under.
Goal time today was 5:00. Fueling plan was to take one gel every 25 minutes, and refill the handheld bottle at one of the creek crossings in the northern section of the trail if needed. Salt tablet every 60-75 minutes
The first twenty six miles are nearly all paved, while the last fifteen-ish are mostly dirt single track, so I expected to run the first section faster..

Navigation:
I had the route loaded on my watch, which helped avoid too much bonus mileage in the first thirteen miles. The FKT track has a couple minor deviations from the official CCT route from the county, I tried to follow the county route. I’ve the northern 27 miles plenty, so didn’t rely on the watch much for those. Ran south to north to get the part of the trail I wasn’t familiar with out of the way first.

Run:
Ran solo the whole way. Tried to settle into a quick but relaxed pace, and ended up running about 6:30 moving pace for the first twenty six miles. Only made two short detours for wrong turns in the first few miles, the trail makes some weird turns that aren’t really marked, but mostly navigated them without issues. Was surprised by some of the punchy hills in the beginning. Had pretty good luck with road crossings, and really only had to wait at Hooes road, Lee highway, and Leesburg pike. Pictures at those since I was stopped anyway, but most of the trail is much more scenic. Got through route 50 and 123 cleanly with no wait.
Started feeling a bit tired at 18 miles, but didn’t start getting hard until mile 28, also when consuming the gels became a chore. Had to grind through the last thirteen miles one at a time. Was happy to get though the section behind Oak Marr without twisting any ankles, far and away the worst section of the trail with tons of rocks and roots hidden under the leaves.
Around 33 miles wondered why I thought this sounded like a fun idea. Noticed some dizziness / lightheaded ness around thirty five miles when I had to walk across some step stones behind a pair of mountain bikers, but didn’t have issues while running. Legs held up quite well today, and managed to get me through well under my target time. Had a couple niggles going into this but they didn’t give me any trouble during the run.
Ended up taking a gel every four miles instead of every twenty five minutes, three extra at the end. Somehow never ran out of water, and actually had extra at the end, so didn't stop to refill anywhere. Headlamp was also unused since I finished before it got dark, but was glad to have it just in case.