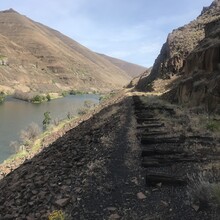 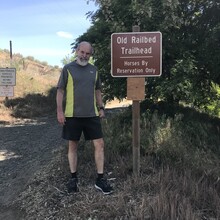 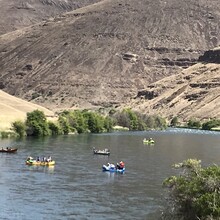 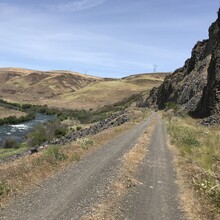 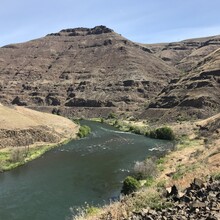 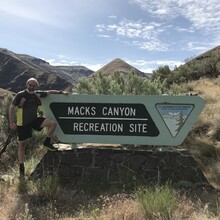 This run has been on my list for several years, and I was finally able to make it happen. My wife was so kind to drive me to the Mack Canyon trailhead, and see me off. She would drive around to the Deschutes River State Park and pick me up in about 4 1/2 hours if all went well.

It was a perfect morning to run, with temperatures in the 60's, and lots of cloud cover. I set off a little late at 9:43 am, and very quickly came to the first of 6 canyons where there use to be railroad trestles across, but they had been removed years ago. The trail kind of disappeared and I had to scramble down and across to the other side.

The day was warming up into the upper 70's, and I made sure to take in calories and stay hydrated. There were lots of rafters camped along the river, but most were enjoying the morning on the bank, and had not yet set out down the river. I made better than expected time through the first 6 miles, and finally got to the good section of trail that was much wider and more runnable. My pace picked up, and the scenery continued to be amazing.

I knew I was getting close to the Columbia River because there were more and more people along the trail. I was really feeling the burn in my legs, and actually cramped up crossing some rocks around a little stream. I had started out with 52 ounces of water, but was now down to rationing myself to one swallow per mile. With less than half a mile to the end of the trail, I caught my toe on a rock embedded in the trail and took a bad fall. I pulled myself up with some bloody cuts and scrapes and managed to still run to the end.

I found Lauri, and washed off the blood at one of the water spigots at the campground. There was a park ranger named Evan who was super nice, and pulled out his first-aid kit to help clean my wounds. I limped to the car and was so glad to have Laurie to drive me home. Even though I crashed and burned at the end, I was happy to have finished the run, and hopefully set the fastest known time on the Deschutes River Railbed Trail.

When I saw this rails-to-trails post, I was wondering if it was you who got to it!

Glad it was you, great effort out there!