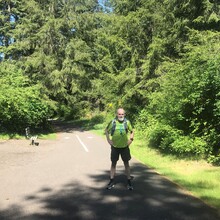 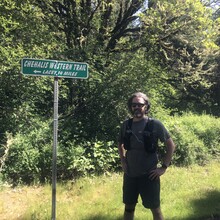 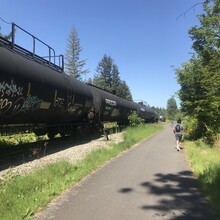 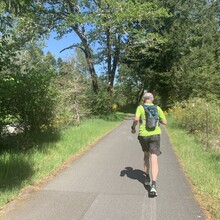 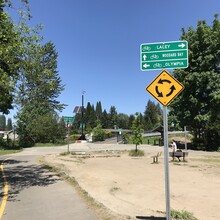 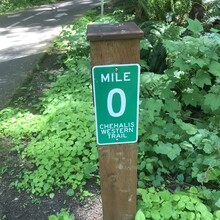 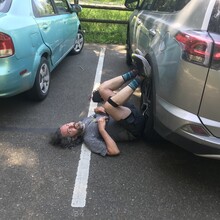 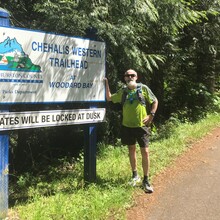 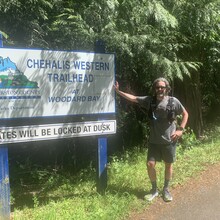 A friend of mine lives in Olympia Washington.  I met Shawn at one of the Dead & Company shows at the Gorge Amphitheater back in 2019.  Shawn is a climber and trail runner, and we have stayed in touch over Strava.  Shawn and I did a road trip to together in 2020 and climbed King’s Peak, the highest point in Utah.  We barely made it off the summit before a major thunder & lightning storm hit, but that’s a story for another day.

Since I’m always looking for another good rails-to-trails adventure, it was kind of logical for Shawn and I to team up for a long run on the Chehalis Western Trail located just minutes away from his home in Olympia.  We made plans to make our run on Thanksgiving weekend, but the Covid pandemic made us reschedule.  We set a couple more dates, but had to cancel those too.

Finally, on a beautiful spring day in May of 2021, we were able to meet up and run the Chehalis Western Trail together.   We dropped one car at the Woodard Bay northern trailhead, and Shawn’s family drove us to a spot close to the southern end of the trail.  There is no parking area or official trailhead at this end of the trail.

We did some stretching and warm up exercises and then jogged along the Yelm-Tenino trail until we came to the junction with the Chehalis Western trail.  There are several signs at the junction, but nothing to indicate that this was the official end of the trail.  We took a couple pictures, set our GPS watches and started our run at 10:29 am.

It was a picture perfect day, and the temperature was a pleasant 60 degrees at the start.  It was forecast to reach 80 by late afternoon, so we wanted to get done as early as possible.  We ran together and were averaging around 9 minutes per mile.  We were both feeling good.  The trail is paved, mostly level and in great condition.  There was good tree cover to partially shade us, with occasional meadows and farms.  There were some cyclist and walkers, but really light use at this end of the trail.  The run was going well.

The first mile post was at mile 19, and they continued with a post every half a mile the rest of the way.  I’m really curious why there were no mile posts from 19 to 21, with no official 21.2 mile post at the end.  Kind of weird.  We made several easy road crossings along the way, and somewhere around mile post 15 the trail ran beside the fast flowing Deschutes river for a short ways, which was nice.

Shawn and I ran beside each other sometimes, but mostly kept single file to allow bikes to go by.  We took turns leading, and every time I checked, Shawn was right behind me, until he wasn’t.  I turned around to check, and Shawn had fallen off the pace so I slowed down to let him catch back up.  We were about 15 miles into the run and for some reason Shawn was starting to struggle, and not feeling well.  We walked for a little ways, but he wanted to keep going so we picked back up with running.

Ever so often Shawn would need to stop and walk, and it was obvious he was not doing so well.  I told him we could bale out and have Abby pick us up, but he wanted to keep going.  Shawn had just received his second dose of the Covid vaccine a couple days before our run, and he thinks it may have had something to do with him not feeling well near the end.  Shawn really didn’t have much of a reaction to the second dose like many people get, but it makes sense that while his body was reacting to the vaccine and trying to build antibodies that a huge aerobic effort like a 21 mile run might cause some issues, and it did.

Shawn dug deep and finished in style with a big surge right near the end, and we reached the trailhead at Woodard Bay.  It was now time to recover and celebrate.  We drove back to Shawn’s house and spent the afternoon on his deck with cold beers, a pot of beans, taco fixings, and Abby’s homemade banana bread.  Shawn seemed to be recovering, and we enjoyed spending time together and sharing stories.  It had been a very special day, and I’m so grateful for friends to go on adventures with.