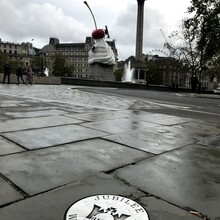 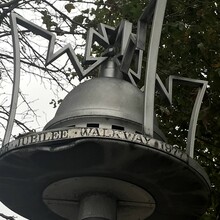 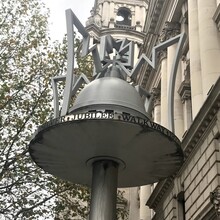 Well, that was far more of an adventure than I was expecting from a run around central London! Firstly, the navigation was a nightmare! The Jubilee Walkway plaques are reassuring when you see one, but they’re so random. Sometimes they’re every 10 meters (Bank) and sometimes there isn’t one for miles (Barbican)! And they are completely non-directional, there’s no arrow or anything to give you a sense of whether you’re on the right path and what your next turn might be. Initially, I thought maybe the top of the crown was pointing you in the right direction, that’d be cool, right? But no, whoever laid those plaques missed that epic opportunity. So, I was far more reliant on my GPS than usual, but the signal kept pinging off the high buildings! There were times when I, and my GPS, had no idea where I was and where the route was either. Barbican! It took me ages to work out the path over the lake was a high walkway. And then my GPS got stuck entirely outside Monument station. It stayed firmly routed to that spot for a good mile or so whilst I ran almost up to Liverpool St, before getting my phone out and realising I should have been heading for the Tower of London. My GPS caught up with me eventually as I crossed Tower Bridge. But something else caught up with me as well, I felt dreadful for the last few miles. I don’t know what it was, whether I’m coming down with something, or I gave blood last week, and that caught up with me? I felt so awful, I had to practically walk the last couple of miles in. I’m so pleased with myself for finishing, and will not underestimate central London runs again! If you’re looking for an urban adventure, this one’s for you….