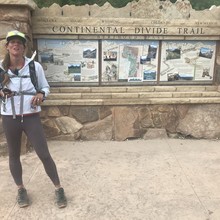 I had my two GPS devices in trekking mode / 30 second pings to preserve battery, hence the mileage recorded is showing up short by quite a bit. I followed the primary Pfiffner Traverse Route as described in Andrew Skurka's brand new Pfiffner Guide, which his data shows as 76 miles.

I initially tried to onsight the Pfiffner on July 4/5 and aborted after 42 miles (just before Lone Eagle Cirque, heading out to Monarch Lake rather than continuing) because I was moving to slow and was facing deteriorating weather. I then came back on July 18 and did the entire route, maintaining much better pace during the first thirty miles but slowing down drastically in the second half. After I realized that I wasn't going to be able to finish sub-48hrs -- my original 'B' time goal -- I relaxed the pace even more and took a two hour nap shortly after sunrise on Friday before tackling the last 15 or so miles to Berthoud Pass.

I am writing a piece for Trailrunner Mag which I expect will take a while to be published though.

Beautiful photo essay of Sunny's wanderings on the Pfiffner:  https://trailrunnermag.com/snowball/sunny-stroeer-dnfs-the-pfiffner-traverse-a-photo-essay