“In the late 1950s Carl Pfiffner spoke passionately about traversing from the Arapaho Peaks to Longs Peak along the Continental Divide. This project retains all of its original mystique and it the ultimate mountaineering adventure in the Front Range. The adventure can be extended by going from Berthoud Pass to Milner Pass. There are many variations to this complicated project and any attempt requires your creativity.” - Gerry Roach, “Colorado’s Indian Peaks Wilderness Area, Classic Hikes & Climbs” (1989)

Given this intriguing description in the most prominent mountaineering guidebook to the area, it’s remarkable that this traverse has not seen more attention. In 1987, Roach & his wife linked Berthoud to Milner Passes (the only 2 paved roads crossing the Divide in this area, the dirt Rollins Pass road also crosses the CD, but with closure of the Needle's Eye tunnel many years ago it is not longer possible to drive over the CD there) in a 16-day backpacking and peak bagging trip, but they did not stay on top of the Divide. Taking some liberty with Pfiffner’s original idea, Roach dubbed this the “Pfiffner Traverse” (to distinguish this from the route along the CD we call the latter the "LA Freeway"). Roach's Pfiffner crosses the southern portion of Rocky Mountain National Park and all of the Indian Peaks Wilderness. The route is up to the individual, but there will certainly be much rugged off-trail travel.

An earlier attempt at Roach's version of the "Pfiffner Traverse" was by Bill Briggs, who started from Milner Pass on 8/7/1979 with the intention of hiking to Berthoud Pass while staying on top of the Divide.  Briggs made it as far as Pawnee Pass in a strong 27-hour push with a 3-hour bivy at Buchanan Pass.

Mark Oveson linked Berthoud and Milner Passes in a quick time of 37h44m, July 29-30, 2011. He did not stay on the Divide and did not summit all the peaks along the Divide. Oveson called his trip "Fast Pfiffner", with the idea to simply accomplish the full traverse in a single push. He travelled 77 miles with 21,500 vertical feet of elevation gain along the way. He summitted 18 peaks over 12,000 feet. His trip was supported along the way by friends and his wife, and Oveson was accompanied most of the way. His evocative trip report is here (3MB), and his gps track is here.

Oveson describes the Pfiffner Traverse as follows:
"As adventures go, the Pfiffner Traverse is hard to beat. Guidebook author Gerry Roach conceived and executed its first incarnation as a 16-day journey [in 1987], hiking from Berthoud Pass to Milner Pass with full backpacking gear, camping each night and climbing dozens of peaks along the way. His goal was to spend time in the high country, to visit remote areas, and to climb remote mountains along the way. He named his journey the Pfiffner Traverse, in memory of a deceased mountaineering friend who had proposed a similar adventure, and he documented the trip in two popular guidebooks."

Andrew Skurka has created a backpacking route for the Pfiffner, which he says is 77 miles in total.  We include his "primary route" as a Variation.

The first person to complete Pfiffner’s original idea of linking the Arapahos to Longs along the CD was Buzz Burrell, who did this giant project on July 8-9, 2002. We give this route it's own page:  LA Freeway. 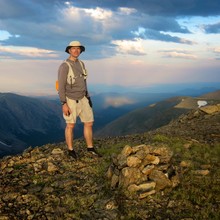