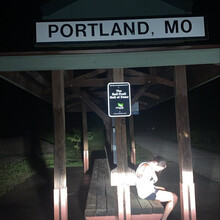 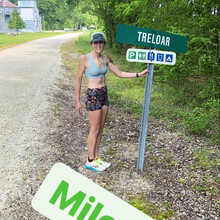 On Sunday, May 16 I began my run across the Katy Trail. I ran through the first day with a few aid checkpoints at trailheads where my boyfriend and dog were waiting to resupply my hydration vest and offer me food. Day 1 felt great and I was able to crush my first 100 miles. At one point in the evening into night my friend Drew Mueller ran with me for about 25 miles. At the point he left for my boyfriend to take him to his car I called it a night and slept in a hammock at a trailhead. Due to rains in the morning I had a late start getting moving, and Day 2 felt much worse than Day 1. I doubted myself being able to accomplish this huge goal, but the thought of the sacrifices others had made to help support me on my goal kept me moving. After more sleep the second night I entered Day 3 feeling much better. There were long periods of walking at points, but when I felt up for it my legs felt able to produce a run again versus the shuffling I had to do on Day 2. My stomach by now was very sugar-sensitive which became a big issue as much of the food and nutrition I had stocked used sugar for fuel. Luckily I had my boyfriend's support at various trailheads across the way and he was able to stop in towns and grab food that we could test on my stomach. Thank goodness for the hummus platter he located it Rocheport, because that was the first large meal I had been able to consume since the start. My boyfriend, Gryphon Ketterling, was also able to support me on bike at various points. He would park at a trailhead, bike to my location, and then bike back to the car with me and help crew me at the stop. I had some success running into the night the first night when I had a friend to run with or the night I had Gryphon bike some with me, but otherwise the amount of animals I was seeing along the way and the fear of being alone in the night had me sleeping more than I wanted to in my original plan. Rains were also a factor that caused some chaffing, but more so caused the issue of a lack of motivation to get going when I was protected from it at various trailheads.

My watch I used during this run was a Garmin Forerunner 645 that I charged along the way with my charger connected to a small rechargeable battery pack. I turned off heart rate during this run to help conserve battery. The only issue I had with using the watch is that since I kept the activity on continuously (no pausing during breaks), it had an issue with distance when I was not moving (laying/resting). During these breaks the watch very slowly added distance. I believe this was almost 5 miles added the first night when I laid down off of the trailhead. My activity ended up 267.99 miles when the trail is noted in guidebooks as being 237.7 miles. There was some backtracking at points if I dropped something, or running off of the trailhead to where my boyfriend had set up my aid station and back on the trail, but not to the excess in miles listed.

Overall I am exceptionally happy with my effort. If not for the rains keeping me in shelter for long periods of time, and for the initial stomach issues I had to figure out I feel like I could have completed this even faster. The ease of terrain of this trail really allows you to test your mental strength to keep going, and I loved that challenge. The scenery of snakes and other wildlife, of the flowers and bluffs and rivers along the way was beautiful. I am so happy I had the opportunity to spend that amount of time in nature and with the kind words and support of friends and family along the way. To be the first woman to cross this whole trail is even more special!