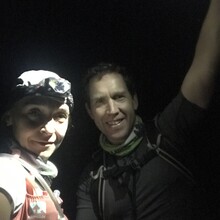 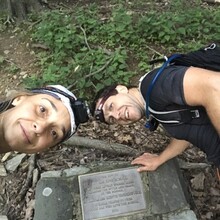 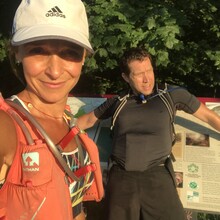 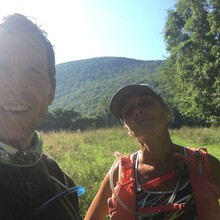 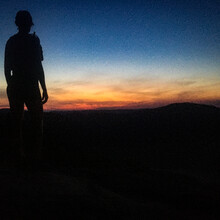 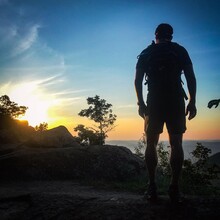 Michele and I have always admired Storm King from across the river at Breakneck and decided it was high time for a first visit. With the weather forecast to be VERY hot we decided on a 4:15 AM depart in order to not only beat the heat, but also maybe get a chance to see Comet Neowise. The trail is a bit confusing in the dark with multiple crisscrossing trails but we eventually got on the right track and made it to the summit for an amazing, comet-free sunrise.

We were able to stow our headlamps during the traverse of the ridge and the rest of the turns were pretty easy to find. It is a bit odd to run the two up and down sections in the middle as it makes it seem more like a workout than an adventure, but the trails are nice and at least you don't have to worry about missing turns (figuring out where to turn around is another matter but we find some signs that seemed like a good bet)! We greatly enjoyed the the ripe blueberries on the North Point Summit - but we left plenty for the next guests.

At this point the heat, the carrying extra-extra water and the billion small stones on bone dry trails had left out feet feeling less adventurous so we did not enjoy the super fun looking rock stair descent as much as we could have but did take in some incredible views of Breakneck looming just out of reach across the river. After that it was just back to the summit and down to the finish (and a little confusion on the same trails as earlier). Pretty long day but could not be helped due to the heat.