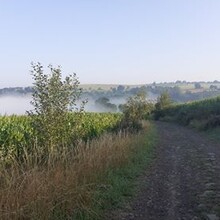 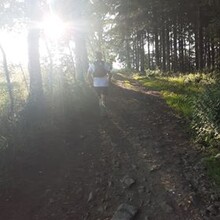 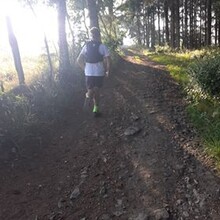 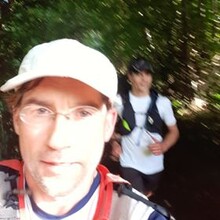 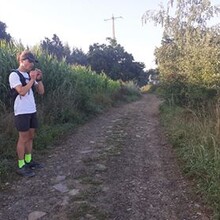 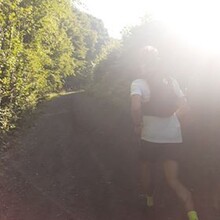 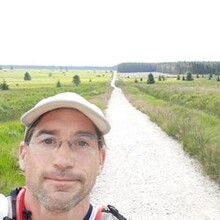 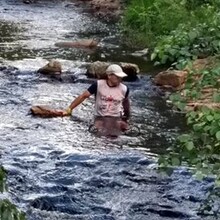 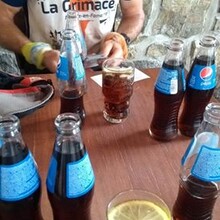 We did this FKT attempt as a duo, in a self-supported matter. For practical reasons we did the route anti-clockwise.

At first the route traversed some urban terrain, then entered the surrounding hills. We enjoyed the first 30k of the route very much. As we were climbing out of the Vesder valley, the sun came up and we overlooked the fog-covered valleyfloors. At this point we were still very fresh. We winded our way through the Vesder valley to reach the city of Pepinster after 30K and 1000 meters of altitude gain.

Pepinster is a key-point in the GR 573: it's the 30k point as well as the ending point of the track. Since we left our car there we were able to fill up on some food and drinks too.

After our little break in Pepinster we choosed to continue the loop-part of the route in an anti-clockwise direction, thus benefitting optimally from the resupply options on the route. From Pepinster the terrain started to gradually gain altitude. First through some open terrain, then connecting to the stunning (but extremey touristy) valley of the river Hoëgne. Here the track became very technical, rocky and at the same time very crowded. All this made the passage along the Hoëgne beautifull but very slow. My companion suffered from pain in his calves and choosed to take a soak in the cold river.

After this we left the Hoëgne and continued through some partly open, partly forested landscape. As the land rose, vegetation grew more sparse, eventually changing into the boggy landscape that our countries roof is so well known for. Luckely we didn't have to tarverse the swampy terrain as we could benefit from some firm gravel paths. Finally after 73k and some 9 hours of running we reached the highest point of the route. At that point we really needed a solid break, the tourist pub at the Signal the Botrange (694 meters of altitude) was an extremely welcome sight.

We each poored down 4 coca cola's in one sitting and had our second rest break. We also refilled our camelbags with water before we continued our way.

The long and firm gravelpaths we followed earlier on the route made us believe the we would get away with an easy passage through the bogs. We both knew that some parts of the high plain can get very very gnarly to cross.

We couldn't have been more wrong!

Just as we thought that we would leave the high plains behind and start our easy descent, we encountered a particularly gnarly stretch: a seemingly endless alternation between broken, almost ankle breaking boardwalks and deep mud in which we occasionally sank down to our hips. This was by far the most unpleasant and frustrating part of the whole day. Our avarage speed sank significantly.

We then reached a downhill section that I knew from a previous FKT route. I remebered it as a smooth downhill but in reality it took much more effort then we had hoped. Some technical, steep downhills and some short uphill intervals made it much slower going then we expected. We barely made up any of the time we 'lost' in  the bogs. At the bottom of the valley of the river Hill, there was a more or less flat section that led into the city of Eupen.

Eupen is quite a beautifull city and forms the capital of the German speaking part of the country. Alas, in our depleted state we didn't have much eye for the surrounding beauty. Our minds were singularly focused on the supermarket at the other side of town and the food we would endulge in. After another hilly section we finally reached the store. At that point we had about a 100k and 12 hours of running under our belts.

Since it was quite a big supermarket we had to search a bit longer for the disired food items and had to queu for some time. Besides that we needed a real restbreak again. Therfore we once again lost some time. I had some pizza bread, a coca cola, an alcohol free beer and a camelbag refill.

The last 26k were hard for me and I believe even harder for my partner. We agreed from the beginning that we would stick together till the end and so we did. Our pace dropped significantly and the kilometers seemed to creep away at an unbelievingly slow rate. We both had enough but still we managed to enjoy the wide open scenery and the distant sight of Pepinster, our ending point. The sun hovered above the horizon and gave the landscape a subtile touch of red.

Just as darkness fell, we reached our car. Happy, proud and exhausted.

We ran from dawn till dusk.