Like all the GR routes in Europe, this route is a well established long distance walking path.  GR meaning grande randonnée which literally translates to 'grand route'. They are well known for their typical white/red route markers. Most GR-routes run over very long distances, often passing through entire countries.

This one however is a local GR-route, making (kind of) a loop through one region, namely the eastern part of Belgium. While doing so it crosses through different geografical zones.

The GR 573 has its starting point in the suburbs of Liège. Beeing the fourth largest city of our country, this is quite a big town. The route cuts through the outskirts of the city for a while, before it quickly ascends into the surrounding hills. The route then mainly follows the Vesder in an eastbound direction up and over it's foresty valley flanks. The Vesder is one of the three rivers that characterize this route.

At around 28km the track crosses Pepinster, a rather ugly industrial town, after which the route deviates from the Vesder valley and traverses some more open terrain. Eventuelly, after 56km, the route reaches the city of Eupen, the capital of the German speaking countrypart. Here it connects with the valley of the river Hill, just like the Vesder it's another river that finds it origins on the hights of the Hautes Fagnes, a boggy plain that forms the roof of our country.

The southbound climb next to the Hill, is one of Belgium's longest, ascending from 190 meters to 694 meters. The track consists of a combination of rocky singeltrack and wide gravel road. After this -for Belgian standards- long ascent the route flattens out and crosses over the Hautes Fagnes. Here the underground is boggy and unstable, the more difficult and frigale sections beeing covered with wooden boardwalks.

The track touches the Signal the Botrange (our country's highest point) roughly at the halfway point. After that some more boggy terrain follows before the route veers into a westerly direction and descends into a the prestine valley of the Hoëgne. This is the third river that defines this GR-route. The terrain becomes more forested and rugged again before it finally reaches some more open terrain.

The route now becomes northbound through some more open country to reach the city of Pepinster again after 124 km, thus completing a full circle. This is the official ending point of the GR 573 main route. There's a more recent southbound extension though towards Spa and Belleheid that adds another 36km to the main route, thus extending it to a full 100 miles. 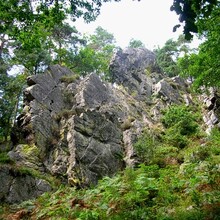 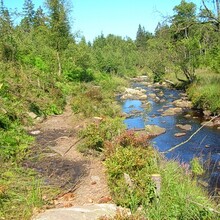 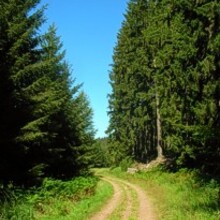 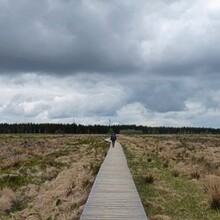 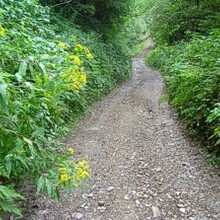