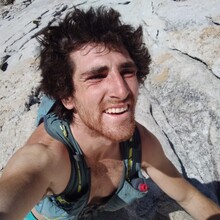 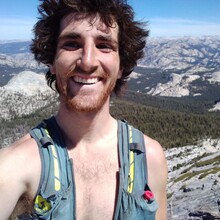 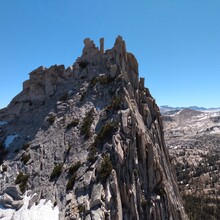 I woke up on June 5th unsure of what I was going to do today. I was still a bit exhausted from climbing the Tuolumne Triple crown two days prior, and climbing the OZ a 4 pitch 5.10d the day before. I decided I would go check out Mt. Conness. Unfortunately it became clear that Mt. Conness was still shrouded in snow, making it appear a lot less desirable of an adventure. So instead I decided to go check out Cathedral.

My original intent was for this effort to merely be a training/scouting run so I started slow. However I arrived at the base in approximately 40mins and it became clear if I kicked it up a gear I might have a shot at the speed record. Thats exactly what I did. The climbing was so incredibly fun and the rock quality superb! Overall amazing route. Once at the top of Cathedral I ran over to Eichorn Pinnacle. I never climbed the route and ended up accidently going up this difficult wide crack. Since it was clearly harder than 5.4 I backed off and checked mountain project. I realized the easy 5th class route was around the corner on the north side. After this small hiccup I charged to the summit. I was impressed with the quality of climbing on awesome quartz formations.

From the top I booked it back down to the trailhead. It appears Jason cut down the gully earlier than I did while I cut cross country through 4th class slabs. I hope this doesn't discredit the validity of my trip, because I personally feel these car to car off trail mountain routes should be open to creative movement through the landscape. Regardless my route only differed slightly through this section and then I soon reached the trail again. I sprinted down the trail back to the car and was pleasantly surprised to find I had broken the 2 hour mark.

I believe that this route can go a lot faster. I lost time getting off route and also initially not even intending on going for the record. Regardless an awesome way to spend the morning!