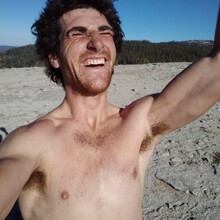 I began running from Camp 4 at 6:24 am. This route is steeeeeeeep and I soon began to wonder if I was fit enough for the challenge. I found myself speed walking the steep technical sections of the Yosemite falls trail. Boom or bust I was committed to have fun and learn something about myself. This route has held a special place in my heart. Having descended the El Capitan trail after climbing the Nose two weeks prior, I was excited to reconnect with the big stone, even if it be from the horizontal plane. The stark beauty of the landscape kept my legs turning. After an hour and a half I found myself at the top of El Capitan! It was approximately 8 am and I knew I needed to finish by 9ish for a shot at Jason's record.

On my way back I accidentally got off trail but soon found the path again. Running downhill is my self proclaimed expertise. I charged the final miles to the bottom of the valley. My poor knees suffered large jumps between rocks, but there was no way I would stop until I reached the bottom. I had to dig deep but I eclipsed Jason's time of 3 hours and 5 mins with a time of 2 hours and 42 mins.

I think this route can go a lot faster once it gets attention from stronger athletes but for now I guess this time will do. It certainly is a classic trail up the most impressive rock in all of North America! And most likely it has been done faster by someone who didn't record their time. Such as some early valley legend or a native person. Regardless this time is the known time so bring it!!!!

So stoked you found inspiration in this running route after climbing the Nose.

Couldn't have gone to a more worthy and inspiring dude!