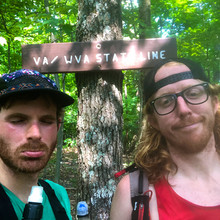 Troy 'Tortuga' Allen and Witt 'El Matador' Wisebram Appalachian Trail Four-State Challenge Unsupported FKT - Tortuga began a northbound thru-hike of the Appalachian Trail on April 12th, 2019, and I began a job as an Appalachian Trail Ridgerunner for the Northern Virginia section of the trail earlier this month. We've been friends for awhile, and I actually dropped Tortuga off at Springer Mountain to begin his hike back in April. So, it was serendipitous that as I was completing my first southbound patrol I ran into Tortuga heading north. As we walked together, we somehow came up with the idea to attempt the Four-State Challenge FKT. Tortuga's dad had come to meet him in Harper's Ferry, WV and it just so happened that this coincided with my day off, and so it was on! Troy's dad drove us the the Mason-Dixon line, early on the morning of May 28th. The pre-dawn sky opened up and was dumping sheets of rain as we drove towards Pennsylvania. Miraculously the rain cleared, right as the sun began to illuminate the woods, and as we got out of Tortuga's dad's car. We loitered around the monument that marks the Mason-Dixon line and the Maryland/Pennsylvania border. We stepped foot into Pennsylvania, started our trackers, and started our southbound run towards Virginia. Tortuga and I have known each other for awhile and used to play in punk bands that played a lot of the same shows and knew a lot of the same people. A few years ago I noticed Tortuga had begun to race and win ultramarathons, which at the time was a foreign world to me, as I was still a devout thru-hiker, working on completing the Triple Crown. It felt inevitable that we would eventually get a chance to do an epic run together, and finally here we were. The climb out of Pen Mar up to High Rock Ledges felt easy and as we reached the ridge we began to run effortlessly. We had discussed "easing in" to the attempt, but we found ourselves moving quickly over the muddy and rocky terrain. Maryland has great and very runnable ridges, and a lot of the AT follows old double-double-track logging roads, which meant we could run side-by-side. The overcast skies and breeze on the ridge was perfect for keeping us cool as we moved. We talked about music, running, and hiking as we ran through the foggy damp forrest. We passed the side trail to Annapolis Rock at about 16 miles, where we came across my co-worker, Mary, wrangling all of the tourists and day-hikers. She gave us hugs and we kept running, feeling great about our progress. We came across the Washington Monument State Park around mile 22. The day was heating up rapidly and the evaporating moisture combined with the humidity in the air made it clear we would need to stay much more in tune with our hydration. There was a spigot at WMSP, so we each drank a few bottles of water and then continued on. Even though the elevation profile was mellow, the heat and the wear on our bodies started to take their toll. At mile 31 we hit Crampton Gap, which had a spigot, so we took our longest break here, about 20 minutes. We drank a lot water and did some stretching before continuing on. By the time we descended from the Weaverton Cliffs towards the Potomac River, we were both tired and dehydrated. We reached the C&O Canal Towpath and began the 3 mile run towards the bridge into Harper's Ferry. The temperature had reached the low 90's and there wasn't much shade as we ran down the C&O and crossed the totally exposed bridges and made our way into Harper's Ferry. I kept thinking that I should just jump into the Potomac. We were nervous about a previous runner who had attempted this FKT and missed the route in Harper's Ferry, so we actually ran both possible options, since the Guthook App and the actual 'blazed' AT are different through the town, and we didn't want to make a mistake. At this point we had crossed the 40 mile mark, and the hardest climb of the section began. We climbed intentionally, quickly, and silently out of Harper's Ferry. The trail was steep and wet. We crossed Chestnut Hill Rd., and knew that we were getting close. This climb is part of the section that I patrol for the Potomac Appalachian Trail Club, so the tread is becoming more and more familiar, but I don't ever remember it feeling as difficult as it did now. As we reached the ridge, we began to run again, with the excitement building. We looked around for the old wooden sign that marks the border of West Virginia and Virginia. Once we reached the sign we checked our time and realized we had bettered the old unsupported FKT by well over an hour and then both collapsed on the ground for a few minutes. Hugs and high 5's were given. There was also quite a bit of painful moaning as we made our decent back to Chestnut Hill Rd., where our friend Stubing was waiting to pick us up. This was Tortuga's first FKT and my first with a partner. It was a great run, great time spent with a good buddy, and it was nice to share a challenge like this with someone. Tortuga will get a ride back to Pen Mar to continue his northbound thru-hike, and I'll start my next patrol tomorrow. It was a pretty good way to spend a day off!