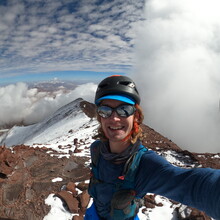 Had coffee and just a few crackers and then slammed a red-bull in the car w/ Flaca on the way out to Volcan Copiapo. It was totally night time when we left around 05:30 and dawn broke as we got there, enough so that I didn’t need a head-lamp to get finally kitted up and ready to go.

It was actually quite warm, but I had 2000m of net uphill to cover, so I packed fairly heavy. I wore my merino wool top from HOKA and my snow pants. I brought my (Jim’s) heavy blue rain coat and also my light down jacket as well as my usual gloves. I wore a helmet from the get go and brought my hiking crampons in the pack (Bryce XT), along w/ a walkie-talkie and spot beacon (probably didn’t need both).

The route I’d mapped out started at the head of the valley that leads to a wide, flat plain and eventually narrows into the canyon that leads up to Copiapo. I’d done this route from the mouth of that canyon (about 7km farther up hill) the year before in 4h50, so I had that in mind as a bench-mark. I also randomly remembered being very psyched (and telling Jim) about being able to maintain 600m vertical/hr up to 6000m, so I also had that in mind as a metric to compare to today.

The route started off w/ a long fairly flat approach (gently net up on the way out) from where Flaca dropped me off to the giant boulders that block any further car access. I tried to just relax on this piece and enjoy the spooky view of Copiapo’s twin peaks nearly 2000m above, shrouded in mist. Kept the HR in the 130s for the most part and hit the car park in 42’. I took about 5 min there to drink an entire pepsi and take a couple layers off and then headed off.

The route then skirts around some very cool humongous boulders and follows the soft bed of the canyon for a few kilometers before skirting up an opening on the left wall. From there, a gentle, wide ridge leads up to a narrower, rockier ridge from about 4400 to 5000m. Around 5000m, the route starts to seriously pitch up and follows a natural channel up a very loose, sandy/rocky ramp up to a high saddle between the two twin peaks.

I’d decided ahead of time to try to squeeze a bit from 5000-6000m just to see what kind of pace I could maintain w/ a fairly moderate effort. I was pleased to see the first 400m in under 30’, but then shit got real around 5500m or so. I’m honestly not sure if I was just getting tired, getting worked by the altitude, or if the route really did get worse, but it felt like the frustration level of the “take one step up, slide half step down” style of climbing really got to me. There were some shouted obscenities and I really felt like turning around a few times. It’s also worth noting that I was completely socked in with fog at this point and basically felt like I was on a giant, steep, sandy treadmill.

Finally, I could see the top of the saddle and a false summit to the right. I skirted up onto the rockier part of the summit ridge, which terrain was firmer, but trickier to navigate. Probably a wash on efficiency, but it felt better. I gained the summit ridge where I encountered the first real snow of the day on the right side. It’s only about 100m from there, so I didn’t bother putting crampons on, but just carefully made my way up, and scooted across to the drier left side for the last few meters.

I actually felt great on the last 40 runnable minutes. I know it was net down, but even for a gentle net down at 4100+m, I felt very good, running around 4’20-30s. Lots of energy left!

Finished back at the car in 5h17. This was a hugely positive run. Not only did I absolutely kick the ass of me from 10 months ago, but I felt great moving at almost 800m/hr from 5-6000m, even on very soft, sandy trail. If I can move at that speed up to 600m on Aconcagua, I will have no problem w/ the record. Now the question is what kind of speed I can maintain from 6000m-7000m. Hopefully we’ll figure that out this week!