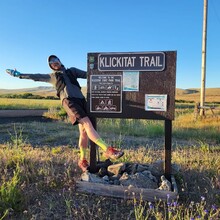 Hello Everyone! This trail ROCKS!

I'm incredibly excited to share this trip report of my successful attempt at the Klickitat Trail FKT. I will say that I technically completed this trail and set the FKT in 4h18m02s back in April. However, my Garmin did not record the activity correctly, and when I tried to upload the 30-mile file, it was corrupted! Garmin support said, "...unfortunately, the file is corrupt, and we do not have a way to fix that."

So, I definitely did not feel good about trying to convince all of you that I had actually completed this FKT. Also, I wasn't sure when my next opportunity to go for a challenging 30 miles like this would be, so I knew I might have to see someone else claim the record before coming back.

Fortunately, or unfortunately, if you're my partner suffering from ITBS, my weekend freed up recently. I decided it had been long enough since my last hard effort that I was ready for another go at the Klickitat! What's even more exciting is that I initially went to the Klickitat Trail in April so my partner and I could look at a house on the market in Klickitat County. In the intervening 78 days, we have closed on that house and will move in July, so this record will mean even more to me!

My partner and I slept close to the trailhead at a rest area in the car, woke up, watched the Western States start, ate some oatmeal, and headed off to Warwick, Washington. I decided to start the trail at this end and head towards Lyle because of the net downhill in elevation. This is the direction that Bryan and Kelly took on their unsupported attempts, not the direction Greg went because he was initially attempting an OnB. 1,500 feet of loss with only 125 feet of gain makes for a very nice gradual slope to run down.

It was funny because, having run the trail before, I noticed that they had moved the trailhead sign to the other side of the trail. The side with the information was actually on the WRONG side of the board. I'm guessing it'll blow over from the wind before too long. Speaking of wind, unlike last time when I was dealing with huge gusts and constant headwinds, the weather was picture perfect for me on Saturday. My goal was to start as early as possible because I knew the day would turn into an absolute scorcher.

I wore my trusty Patagonia Sun Hoody, Nike shorts, Senchi prototype Hoodie, Injinji Ultra Socks, and my favorite pair of Hoka Speedgoat 4s (with carbon Superfeet) that I didn't run in for two weeks beforehand to keep them extra bouncy.

I carried four 18oz Salomon/Hydropack soft flasks with 60g of a "Tailwind-ish" dextrose/supplement blend I've reverse-engineered and made myself at home and one 18oz handheld Nathan with pure H2O for when sugar sounded horrific. Loaded this up in a Salomon Skin12 with no other nutrition and a pair of headphones that I didn't even remember I had.

Started right at 05:55. The first three miles are pretty different than the rest of the trail in terms of the surrounding terrain. The trail starts high up on a plateau, and you can even see Mt. Adams in the distance from the trailhead. I was running through what seemed to be some private farms and pastureland. I can't remember exactly how many, but I went through several gates during this section. Wide-open spaces are quickly replaced by the high walls of Swale Canyon starting just after mile 3.

The trail itself is extremely rocky due to this being a retired rail line. There are quite a few spots where you must choose the lesser of two evils when deciding which side of the gravelly trail to run on. Be sure you're very comfortable with your shoe/sock pairing or it will be Blister City for you. Due to the cooler temps and lack of wind, I felt solid during the entire Swale Canyon section. This was my favorite segment from my first attempt, and it did not disappoint the second time. Managed to avoid bathroom breaks and run consistently for the first 10 miles. Quick pee break, and I was back on my way.

I cruised through the crumbling buildings and refuse along the trail at 12ish. Then, blew completely past my turn to get to the road at 14! It had been 78 days since my last attempt and about 78 days and 6 hours since I had read Bryan's report about needing to avoid the lack of a bridge for a river crossing on the trail. After about a quarter-mile, I noticed the beautiful rushing Klickitat River on my RIGHT, which is supposed to be on the left. I knew I'd goofed by following the signs that say Klickitat Trail at that parking lot. Quickly course-corrected and kept the pace up on the road through Klickitat the city. Have I typed Klickitat enough times?

Then, around mile 20, I started having a low. While I was excited and energized that I was well on pace to break the FKT and even my own previous unofficial time, I was doing a little too much mental math. This caused me to overthink how my body was feeling, and I realized I was feeling pretty crappy. I should probably carry more plain water because, at a certain point, that high concentrated sugar beverage is unstomachable. This caused me to need to walk a few spots in the final 10 to avoid becoming too nauseous, which was also exacerbated by the creeping heat.

Once you leave the road and return to the trail, it becomes a charming riverside run. There are some parts where you run through some more farms and gates, but the trail mostly just meanders its way south towards the Columbia River. With about 1.5 miles left, I crossed the Klickitat on an actual bridge and pushed myself to keep running into the finish!

Molly had shuttled me to the start and was now waiting at the finish line for me. You can see the video of me finishing on one of the YouTube links. Thank you, Molly!!

I was utterly pleased with my time, but I definitely think someone (not me because I can't do this a third time anytime soon) could break 4 hours quite easily on this trail. I can't wait to read about their experience!

I also want to thank Greg, Bryan, Kelly, Steven, and Matt for sharing their experiences on the Klickitat Trail. It was a huge help!

If you'd like to read a shorter trip report about my first attempt you can find that on my Instagram: https://www.instagram.com/p/CcJ8dBqrBFG/