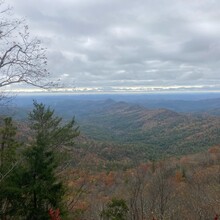 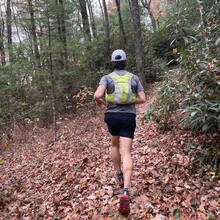 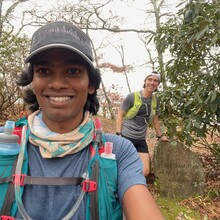 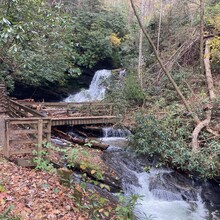 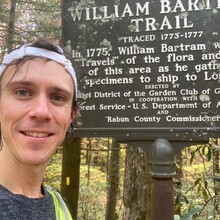 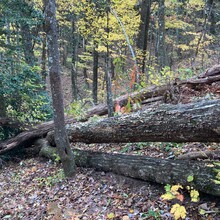 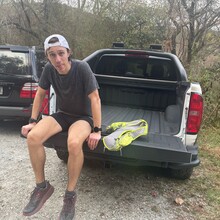 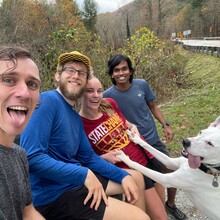 Shashi and I were trying to start at 7:00 am. That was ambitious, so we didn't actually start until 8:30 am from just north of the GA/NC border. We had one last look at the car that we parked on Hale Ridge Rd as we passed and then we were off to Rabun Bald 4.2 mi away.

The climb from the trailhead to Rabun Bald is around 1,300 ft, and I was glad to check the second highest peak in Georgia off my Georgia 4000ers list. We spent a few minutes on top taking pictures, from the ground and from the lookout even though it was foggy. You could see what I think was Dillard to the west through the fog. After that, we took off down the hill. Shashi was leading at this point. Neither of us were liking the fresh leaves covering the trail because it was making us unsure of our footing. I went around a switchback to find Shashi on the ground, I didn't hear him, but he had fallen. Tripped over a small branch that was obscured by the leaves. We were attempting the route unsupported, so I stared at him with cold, dead eyes. Just kidding, but he understood the look I gave him. We stopped for a few minutes while he checked himself out; he eventually helped himself up. We started running again. This was at around 5 miles.

We got some more good views over the next few miles. We passed Flat Top, another 4000er whose summit have to visit the summit another time. Shashi was running pretty gingerly, which was troubling. He admitted later that he was handling the downhill particular badly, and this was the biggest generally downhill section of the run. I stopped at a water source around mile 14 to refill my two water bottles, and it didn't take me long to make up the few minutes to catch back up with him. Then another small mishap. I made it to Warwoman Road a bit ahead of Shashi. When I was waiting, I noticed a yellow blaze on the other side of the road that was not on the trail I descended past the waterfall. I trekked back up the hill to travel the correct section and realized that when I originally should have gone across to the south/west side of the waterfall to follow Bartram, a wall of people were standing there. I thought they had stopped to let me pass and took a hard right. Anyway, I circled back up and corrected myself. What was one more tiny hill for the day.

Shashi and I ran through Warwoman Dell and started the second biggest climb of the day. At this point, Shashi wasn't feeling it. He told me, and we decided that he'd head back to Warwoman Dell so that our friend's Alex and Kristen could pick him up there. I continued the last half of the route solo and the attempt would be classified as supported.

After Shashi left, I found the section from where we split up to the first time I hit the Chattooga to be mentally grueling. Then running along the Chattooga for a bit helped my perk up. I waded thigh deep through a stream at one point, not sure if there was a bridge there in the past. While I was cooling off in the water, I went ahead and filled up my water bottles one more time. I had been drinking Tailwind up until this point, but I was tired of it and used straight water for the last several miles. Cooling off in the water helped morale as well even if I wasn't initially excited about getting in.

The last several miles felt like a grind. I passed some occupied campsites and some nice people hiking with their dogs. A couple miles out I ran into Alex and Kristen hiking a bit. I said "Hey!" and "Did you pick up Shashi?" They had. I made it to 28 and met Shashi! After stopping at the end of the trail for a moment, I decided I needed to run into South Carolina as well, so I went across the bridge and returned and waited for Alex and Kristen to come back to the truck. Afterward we looped up through Highlands and back to Hale Ridge Road to get my car.

Notes: I carried two 20 oz collapsible water bottles in my Camelbak vest which I refilled with a filter pump. When we started, the water bottles were filled with Tailwind. I carried three more individual (200 calorie) packets of Tailwind, but I only used two of those. Other than that, I ate half a Clif bar, (what I'll call) an 'adult' fruit roll up, and a quarter or a chocolate cookie. I wanted to eat a bit more, but as it is most of the time when I run it was hard to put down food.