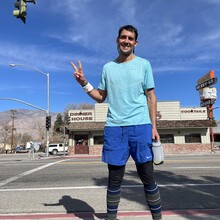 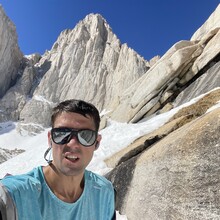 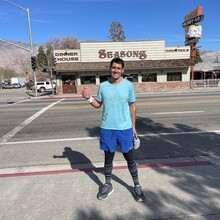 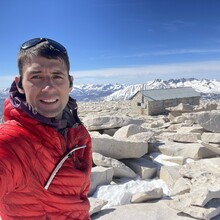 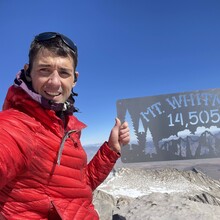 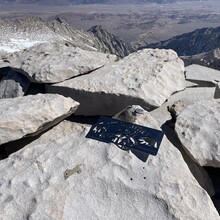 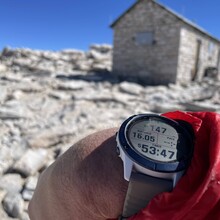 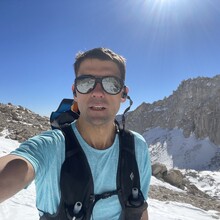 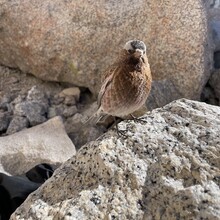 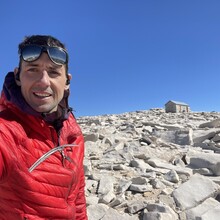 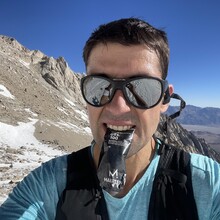 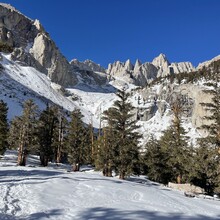 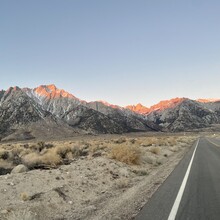 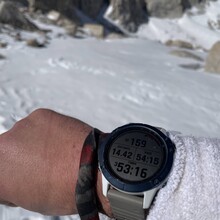 I don't know if this should be a separate FKT since my effort was done in winter? I had to put on boots, adjust layers many times, put crampons on and off, posthole, didn't have access to water and couldn't jog uphill after cutting to NF of LP Creek because of being weighed down by winter boots/crampons and not having an opportunity to use a nice trail. I didn't glissade on the way down in order to keep it an on-foot endeavor, and partly because I was wearing base layer pants with shorts.

In any case, it was a cold morning with a good amount of headwind as I jogged from Main Street/Whitney Portal Road up to Whitney Portal. I stashed my winter boots/crampons/ice axe/running vest a couple miles up the trail, near the cutoff to Mountaineer's Route (North Fork of Lone Pine Creek). I also stashed a bit of food at Whitney portal and snacks/water every 4 miles up Whitney Portal Road on the day of the run.

On this day I wasn't going after the FKT because I knew it was done in summer by Jack Kuenzle, who is a total BEAST, someone I look up to as a mountain athlete, who has paced me on my first ultra, and provided some important feedback on my training plan. I didn't even have a goal time, just a goal of having a good workout and see how long it takes me to gain about 11,000ft to the top of Mount Whitney, in winter! I have a climbing trip in Nepal planned, so it was sort of a workout/way to assess my fitness. My goal was to make it to Whitney Portal in less than 3.5 hours (ended up being 2 hours 22 mins from LP), and to summit in 4-5 hours after leaving Whitney Portal, a I wasn't acclimated and haven't been above 10,000ft in couple of weeks.

I got to Upper Boyscout Lake in 3hrs 53 mins after leaving Lone Pine. Summit in 5 hours 54 mins after leaving LP. Since I knew FKT was just over 12 hours, I realized that it shouldn't be too hard to obtain since it is all downhill from here. So, I tried to take my time and pace myself on the way down from the mountain in order to not take a nasty fall or burn out my quads before reaching the road which is all downhill.

One problem I had on the ascent is access to water. My plan was to fill up water at Lower Boyscout Lake, as the trail passes over its outlet on most years, in winter. However, the trail passed WAY ABOVE and I would have to climb down and lose a lot of time. So, I decided to keep going, though last water I had was at the cutoff to Mountaineers Route. FML, I thought. I knew there was a potential for flowing water due to snow melt below iceberg lake, and fortunately there was a tiny drip mixed with dirt which I SLOWLY collected water from. After adding electrolytes, it didn't even taste as bad.

On the way down I got to Whitney Portal and realized I may even be able to break the 10-hour barrier if I hurry. I was able to bust out 7min20-40 second miles all the way down to Lone Pine, though my legs were pretty damn beat by that time. It is insane to say, but a better mountain athlete, acclimated to altitude, can probably take this down to 7 hours. Which is crazy to think, because couple years ago I didn't even think it would be possible to do a day hike of Whitney from LP in a day!