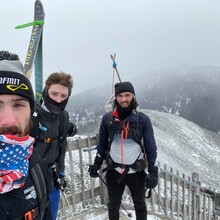 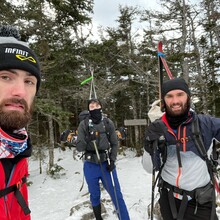 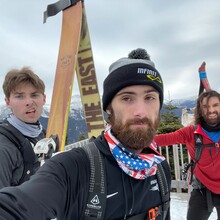 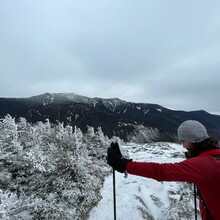 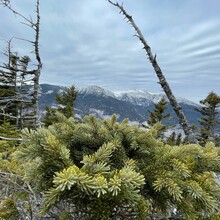 This is an awesome challenge that the three of us have been eyeing long before there was snow to shred. One might argue that there still isn't snow to shred. Ice builds character. Because we are the first names officially on the board, and I've found it difficult to get in contact with the originator of the FKT, we thought that we might lay forth some of our ideas on this style and etiquette of this route. This suggestion can be followed or rejected, it's just our opinion; we just thought that it might be nice to have a uniform method to go after this route, so we're all playing by the same rules.

We began our journey with the most scenic part of the trip - a 1 mile road walk along Route 16. It was cold. At the end of the road walk, we bailed onto the only flat section of the day, the Lost Pond Trail. As we began the Lost Pond section, an important conversation about traction ensued:

"Should we put our spikes on?" Xander inquired.

Nik followed up, "yes, we should".

And so we did. The Lost Pond trail had only a couple inches of fresh snow covering it. Throughout the day, the low snow cover likely had a positive impact on the speed of our hiking, although the downhill skiing conditions left much to be desired. Once linking up with the Wildcat Ridge Trail, we began the most difficult climb of the day. Wildcat Ridge is steep and challenging under the best of conditions, and it's certainly no joke in the winter. The views of the eastern side of Mount Washington, however, are second to none. This slightly overcast day was no exception: what clouds existed were high above all peaks, and the ski was a beautiful grey/purple for much of the day.

After reaching the summit of Wildcat D, we quickly transitioned to our downhill gear and blasted down what seemed like the only open trail on the mountain. The views were spectacular, but the snow conditions were "Bauer Worthy™" (Eric Hase). We decided to get our packs set up for Cannon while still in the Wildcat parking lot, so after strapping the skis back on to the packs, we headed towards Cannon.

Because we were all set up, we were able to jump on trail relatively quickly after arriving at the bottom of the Kinsman Ridge Trail. Cannon is probably the middle-difficulty mountain of the three. We were able to work up the mountain at a relatively consistent pace, although we were certainly a bit less fresh for the second mountain. For this mountain, we wore spikes from the very beginning. Once again the views were on full display as we crested the Cannon, with towering view of Franconia Ridge to the east. Cannon also seemed to be the coldest of the three mountains, perhaps because it was the most exposed. Perhaps not.

In terms of the skiing, Cannon probably had the best snow conditions of the three mountains. This is not saying much, however, because the snow levels are particularly low right now and everything is glare ice. As east coast skiers, we find these to be the only acceptable skiing conditions. We made sure to keep to skier's right as we descended as Cannon has a couple of different base areas, and we successfully ended up back at the car. Again we set the packs up in the parking lot before blasting over towards Waterville Valley Ski Resort (Tecumseh).

Although we were getting tired towards the end of the day, we found Tecumseh to be the easiest hiking of the day. We again wore spikes all the way up on this mountain, although there probably weren't a ton of spots where it was needed. We reached the top with a few minutes of daylight left in the day, and the wind was picking up as night began to fall. We hurried back over to the top of the ski resort and began the final descent. Waterville Valley had one very nice section of snow conditions, but was otherwise rather comparable to Wildcat's conditions. The light was flat and we were a bit wiped for the descent, but we had a great time nonetheless. Itinerary for the trip is below!

We followed the route that was set out by "rockhopper", so I will use the same formatting for times:

Itinerary was as follows:

"I think I can literally feel the lactic acid running through my legs."

"What's the go-to fast food establishment when we're done with this?"