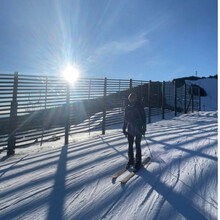 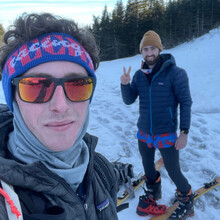 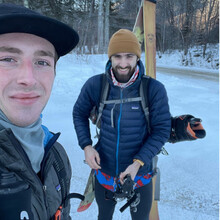 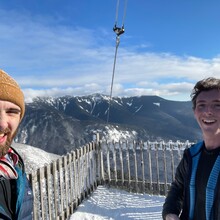 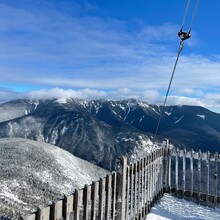 Back again with the NH 3 Mountain Challenge! Quick note: Zach's Strava track shows up a couple miles longer than mine because he forgot to pause his watch for a couple of miles as we drove away from Wildcat.

We would love to see more people going out and sending this challenge! Whether for an FKT or just as a day-long challenge, it's a really fun way to spend a day with friends in the White Mountains.

It was a beautiful, clear morning in Pinkham Notch. Hardly a cloud in the sky. The thermometer on the car read 4 degrees as we pulled into the Wildcat parking lot at around 8:15am, which was just swell. T-shirt weather.

We departed the car at 8:32am, walking down Rt. 16 and then down the Lost Pond Trail, which are the only two flat sections of the day. While we made great time during these 1.7 miles, they did little to warm us up, and we weren't upset when we began the toughest ascent of the day: Wildcat D via the Appalachian Trail.

Zach, being an insane person, elected to do all of the hiking for the entire day in a pair of touring boots without spikes or crampons. I elected for winter trail-runners and microspikes. Luckily, the hiking conditions throughout the day were pretty prime. For the most part, the trails were covered and packed down. Going up wildcat there were certainly sketchy spots with icy and precarious ledges, but we took our time and stayed consistent on the ascent. We both felt great physically during this ascent - a positive sign for the day.

We reached the summit platform with its gorgeous views of Washington in 1 hour 35 minutes. Because Zach was already in touring boots, he transitioned to skis much faster and zoomed down to get the car ready to head to cannon. I followed shortly behind, blinding myself in a snowmaking cloud along the way. I arrived back at the car at 10:22am.

Our car-to-car time for Wildcat was 1 hour 50 minutes, taking 23 minutes off of the time from last year.

The drive to Cannon was uneventful. Was we drove west we observed more and more clouds rolling in, but this didn't amount to much, and by the time we reached Cannon, the temperature was up to a balmy 17 degrees. We left the car and began our hike up Cannon at approximately 11:26am. Per usual, Cannon was steep but consistent, and its short distance makes it feel like a pretty quick hike.

We both refused to start cold, so we wasted a couple of minutes by starting off with excess layers for approximately 3 seconds before stopping and shedding them. We felt pretty solid during this ascent as well, but towards the end of the steep part, we could feel the lack of food that we'd eaten starting to catch up to us. The sun was out and Franconia Notch was positively glistening by the time we reached the alpine zone. We made our way over to the summit tower, snapped a picture at 12:25pm, and the transitioned to skis. Once again Zach jumped ahead on the transition, skiing down to get the car ready for the next drive. We both made several wrong turns during our ski run on Cannon that almost brought us down to the wrong base area, and the traversing required to correct these mistakes definitely cost us a minute or two.

Our car-to-car time for Cannon was 1 hour 13 minutes, taking 25 minutes off of the time from last year.

The drive to Tecumseh (Waterville Valley Ski Resort) was similarly uneventful. Our transition time was quick and efficient, and we started our climb of Tecumseh at about 1:22pm. I definitely crashed a little bit on this hike; I was chasing Zach up the mountain from the get-go, and that's how it remained for the entirety of Tecumseh. He patiently waited for me for a couple minutes at the intersection of the ski-resort path and the summit spur (possibly costing him a couple Strava crowns, RIP.) After running up and tagging the summit, we hustled back over to the top of the ski resort.

This was the only time that we actually skied together during the day because we obviously wanted to finish at the same time. The top part of Waterville Valley Ski Resort wasn't open yet, so for the first third of the run we were skiing down crusty, choppy garbage. I almost immediately took a digger on this choppy stuff (embarrassing), which probably cost us a good minute or two. Once we reached the part of the mountain that was actually open, we sent it down on our tired legs and hustled back to the car.

Our car-to-car time for Tecumseh was 1 hour 30 minutes, taking 24 minutes off of the time from last year.

Honestly, I don't think either of us were expecting to take that much time off of the record. A lot of little things go into the ultimate elapsed time for a NH 3 Mountain challenge. Obviously the skiing and hiking are big parts, but the quickness of transitions also plays a big part, as well as nothing going wrong during the drive (accidents, inclement conditions, traffic, etc.) If you're willing to do the hiking in touring/skiing/snowboarding boots and can actually maintain the same hiking speed, that almost certainly saves a significant amount of time during the transitions as Zach picked up an extra couple of minutes on me during each transition.

Next time the record is broken, I have a sneaking suspicion that it's going to be by mere minutes, a lot more rushed and with more suspense.