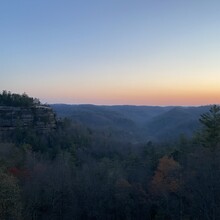 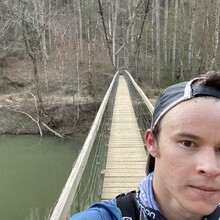 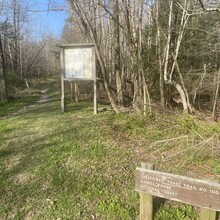 I'm training for Strolling Jim 40 this spring and was intending to use the Yamacraw 50k as a last, big training stimulus for the race 3 weeks out. Recent flooding in the Big South Fork delayed the event until mid-May, leaving me searching for a replacement effort.  I had seen this FKT route posted last winter and it seemed like an approximate replacement for a 50k race effort. I love the Gorge and was able to get more excited about the idea of setting this FKT than I was about the notion of running a random 30+ mile run somewhere.

I set off just after 7 AM on a lovely, cool morning. I'm in the middle of a heavy training block (I'd just finished up back-to-back 15/15 days at 5:44/5:34 pace just 3 days before), so I was tired from the start and never really found the flow I was hoping to find. Regardless, it was wonderful to be in the woods with a sense of purpose, attacking a route on trails that I have nearly beaten to death over the past 5 years. I kept the effort honest but didn't push too hard on the way out. My shoes were giving me some issues but nutrition and fluids were going down well. I hit the halfway/turnaround point at Corner Ridge in 2:34 without giving too much thought to time/pace, but rather just allowing my legs to dictate an honest but comfortable effort.

I had a notion that I may be able to sneak under 5:00 if I had a good second half, so I decided to "give myself a chance" at it by letting loose a little on the 2.5 mile downhill from the Corner Ridge Trailhead. I felt pretty solid down the hill and into the next series of climbs back toward Bison way and figured I may still have a shot at sub 5 until I hit Indian Arch around mile 24. By that time my shoes were really starting to rub blisters on the bottom of my feet, the temperature was starting to rise into the mid 70's, and (worst of all) I realized my fluids were running lower than I had thought and knew I'd have to start rationing them to get through the final 2ish hours. From the suspension bridge back, I just focused on optimizing performance between the rising fatigue, dwindling fluids, rising temperatures, and worsening blisters.

I ran out of fluids at the top of the Pinch 'Em Tight climb with about 4-5 miles to go. While I knew I'd get back just fine, but reconciled with the fact that the final stretch wouldn't be ideal. No fluids also meant I didn't have the desire or ability to properly process nutrition (which I had plenty of), so in addition to becoming increasingly dehydrated, I was also running on less than ideal fueling.

Through the whole day, I had only seen maybe 10 people total.  As I reached the last stretch into the state park, the scene suddenly changed to a Disney World-esque situation with once-a-year nature gawkers piled 4 across the trail. While not chasing sub 5 or anything in particular, I still wanted to finish it out strong. Weaving in and out of people, I finally made it to the top of Natural Bridge to finish up in just over 5 hours 10 minutes for the 35.6 miles with ~5,000 of gain. I'd love to go back and take a crack at sub 5 with better weather, shoes, and fueling.

[Editors Note: Zack ran the Balanced Rock Trail version of this route, adding .5 miles to his effort. Five minutes have been taken off his route to reflect the extra distance.]