Achi 7 summits are seven peaks spread across Achi-mura in Nagano prefecture, which all have a historical background, great scenery, and are well maintained. Mount Ena, one of the seven peaks, is also included in the 100 Famous Mountains of Japan. Despite all of the peaks being located in one town, there is over 50km of traveling to get to all the different trailheads depending on which trailhead you decide to start from. There is also an event held all year round where you can receive a special badge/pin for climbing all seven of the peaks and taking a picture of the signboard, and showing them to the staff at Hahakigi-kan.

There are several approaches to climbing all seven peaks but the start time begins at the first starting point and ends when you return to the starting point of the last summit. It's up to you to decide which trailhead to start from and what order to go in.

For more information, please look at the link:

For individual recording, these are the start/finishing spots of each mountain that are shown on the website.

Mt Ena is the southernmost mountain of the Central Alps, located on the border of Nagano and Gifu Prefectures. It is one of the "One Hundred Famous Mountains of Japan". It is located southwest of the Kamisaka Pass, which was crossed by the Tosando Road, an ancient highway. Mt. Ena's name comes from the fact that the afterbirth (placenta) of Amaterasu was "dedicated" to this mountain thus getting the name Mt. Ena. Ena means the placenta in Japanese but the kanji used in the name are different. The large mountain mass stands out from a distance and is said to have been a landmark for ships navigating Ise Bay. The trees from this mountain are also used to make the paper streamers at the Grand Shrines of Ise.

1.Hirogawara Trailhead Parking Area, start at the gate at the end of the parking area

2.Misaka-toge Pass Parking Area, start at the start of the trail head

Located north of Kamisaka Pass, one of Japan's ancient highways, the plateau is covered in bamboo grass. The views along the plateau while surrounded by bamboo grass are breathtaking. When the weather is clear, 23 of Japan's 100 most famous mountains in Japan can be seen from the peak.

3. Or continue from Mt. Minamisawa

Okawairiyama is a 1,908-meter-high mountain in the southernmost part of the Central Alps. It is the headwaters of the Okawairi River, a tributary of the Yahagi River system, and the Wachino River of the Tenryu River system. The summit offers a good view of Mt. Ontake, the Northern Alps, the Central Alps, the Yatsugatake Mountains, the Ina Valley, and the Southern Alps. The summit also commands views of the mountains in the Mikawa area, the Nobi Plain including Nagoya City, and the Suzuka Mountains. In addition, if conditions are favorable, Act Tower in Hamamatsu and the Enshu Sea can be seen. The south and west sides of the summit are bamboo grasslands. The mountain used to be a little-known mountain, but the local government has been improving the mountain trails by cutting down the bamboo grass. It has also been selected as one of the 100 most famous mountains in Shinshu.

1. Araragi Kougen Ski Resort, start right at the end of parking lot 1 (there are several parking lots labeled by numbers, the further away the lot the higher the number) at the ski resort

2. Jibuzaka-toge Bottom Parking Lot, right after crossing the road from the parking spot of Mt. Jatogeyama

This mountain is located southeast across the Jibesaka Pass from Okawairiyama. Before reaching the summit, you can see a nice view of the Southern Alps. At the summit, there is an observatory but the surrounding vegetation makes it hard to get a good view. It's the shortest trail of the seven summits but it offers a fast technical downhill with occasional road.

Jibezaka Tourist Center, start at the end closest to the trail of the large bottom parking lot right off the main road.

Located about 5 km north of Fujimidai Plateau, the shortest route to the mountain is from Furusato-mura Nature Park. In the old days, this trail flourished as a road to Magome, the forty-third of the sixty-nine stations of the Nakasendo connecting Edo with Kyoto during the Edo period in Japan, but it is now impassable. So, a new trail has been built that leads up to Mount Miamisawa. From the summit you are surrounded by bamboo grasslands and have a nice view of Natsukagawa city there is a trail that connects to Fujidai Kougen from the summit.

The summit is reached via Nashino Pass from Kiyouchiji Highway, which is said to have been passed by the Mito Ronin in ancient times. At the summit you can see Iida city with an unmanned hut.

Seinaiji Community Center, start right at the parking lot before the building.

The shortest mountain of the seven summits, Mt. Amikake is a small mountain that is located in the middle of the village that Higashiyama road passed through. The trail and summit are forested offereing little for views expept for a few spots along the trail. 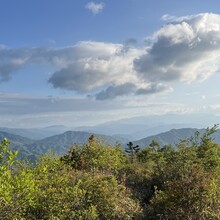 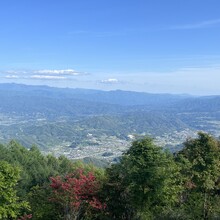 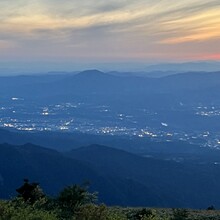 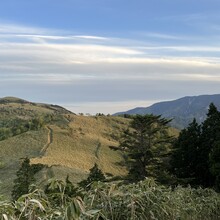