Although this is somewhat unusual as the running path/trail on this bridge is concrete it is one of the most popular running routes in Charleston, South Carolina if not the most popular.

The Arthur Ravenel Bridge is a cable stayed bridge over the Cooper River and connects the town of Mount Pleasant to Charleston, SC. It was opened in 2005. The bridge has a main span of 1546 feet and according to Wikipedia is the third longest cable stayed bridge in the Western Hemisphere. The running path on the bridge extends beyond the bridge and it 2.5 miles one way across and has a maximum grade of 5.6%.

I will be attempting to run 100 miles or 20 times back and forth. I will be supported at a base camp on the Mount Pleasant side underneath the bridge. I will have a Spot GPS tracker recording the entire run and will publish the link as well as recording on my Garmin 235 and Strava.

The Arthur Ravenel Jr Bridge is a suspension bridge that spans the Cooper river and connect the city of Charleston to the Town of Mount Pleasant in South Carolina. The bridge is 10 years old this year and is the 3 longest suspension bridge in the Western Hemisphere according to Wikipedia. From the base of the bridge on the Mount The bridge was constructed with an additional running and biking path so people could access and walk, run or ride their bikes along the bridge. It rises over 300 ft in the air giving extraordinary views of the Charleston Harbor, the Atlantic Ocean, the city of Charleston and its surrounding islands.

The ARB is also a part of the the East Coast Greenway Trail system that will eventually connect Maine to Key West Florida.

The ARB is a focal running place for the residents of the low country. The bridge offered a 2.5 mile one way or 5 mile out and back demanding lap. An almost 6% grade for .8 miles greets you on the Mount Pleasant side which then turns into a .2 false flat followed by a 1.5 mile gradual grade down into Charleston. There you turn around and follow the same path back up and over.

The bridge is solid concrete and steel with no shade areas so runners are completely exposed to sun, rain or wind.

I have run this bridge for 10 years and live the challenge it provides. I wanted to to be the first person to attempt a 100 mile endurance event on this bridge to see if it could be done and what toll it would take. 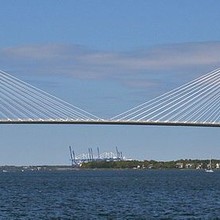 This route on the old FKT site
http://fastestknowntime.proboards.com/thread/1434/arthur-ravenel-bridge-charles…