The Assateague Island End to End route was dreamt up and first ran by members of the Pemberton Running Club from Salisbury, MD in 2015.   Assateague Island is the most beautiful and longest stretch of uninterrupted natural wild space open to the public on the Eastern Shore.  The route consists of 35.64 miles of running on the beach in a straight line, there's no getting lost.  Traditionally the route is done in a North to South direction during the cooler months of fall, winter or spring.   For the effort to count, the whole length of the route must be run on the sand.   Hopping up off the beach and using the State and National Park asphalt access roads where possible is not part of this route.

The South side of the Ocean City Inlet is the Northern most point of Assateague Island.   As such the rock jetty on the south side of the inlet serves as the start/finish location on the northern end of the route, depending on which direction you decide run.   On the South end of the route, 2.25 miles past the Tom’s Cove Visitor Center beach front parking lot in a southerly direction, is a break in the dunes and a path that leads toward a group of prominent historic Coast Guard buildings and structures.   The tallest of these, most easily seen from the beach is a tall steel spotting tower.   The base of the tower is the finish/start of the route on the Southern end.

The Assateague Island End to End is surprisingly difficult despite the lack of elevation gain and modest distance.   Many variables to take into account when making an attempt at this challenge include tides, harsh weather conditions in the winter, exposure and heat in the summer, logistics of getting to the start and the finish, (neither are accessible by vehicle) back up plans for extraction if all doesn’t go as planned, navigating the hours of operation and rules for the two different parks and wildlife refuge that you will be passing through, etc.   The local ultra-running community has been keeping this fun, beautiful and challenging adventure close to our chest for over seven years, but are now ready to share it with the rest of the world. 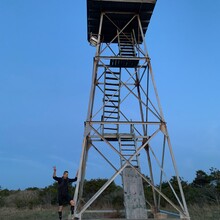 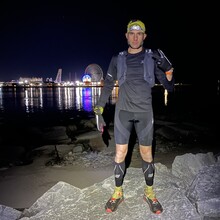