Blodgett Peak, situated on the farthest-east part of Rampart Range, is a spectacle from the top,
with 360-degree views. You can see Pikes Peak, Rampart Reservoir, the Air Force Academy,
Colorado Springs, and well beyond the eastern plans. But this demanding little jaunt is NOT
about the summit—it’s a loop that circumvents Blodgett Peak. Although only 11.5 miles long,
this gig packs a punch with 7,300 feet worth of gain/loss vert.

The run takes a little bit of everything into consideration, from groomed, well-known trails, to
lesser-known trails, to forest service roads and a fair amount of bushwhacking, rock hopping,
and route finding. And for kicks, a summit tag of a named peak (Ormes) that is nearby. Well, cuz
it’s there!

Starting on Colorado Springs Blodgett Peak Open Space and heading clockwise, the shortest
way from the trailhead is to take the steep Red Squirrel Trail to the even steeper Douglas Fir
Trail to its technical end. From there, you take a trail that heads due west through the Waldo
Canyon burn scar onto Pike National Forest Service land. The FS actively removes/chainsaws
fallen trees from the trail, but don’t be surprised if you still have to climb over a few at any
given time on this section. The first 2.5 miles alone to the ridge overlooking the city has 2200
feet of vert to get your blood going.

You’ll run into FS road 302 (Google says 303) just one-fourth-mile east of Ormes Peak. Head
west about 100 yards on this road and look for a trail to your right. A pile of rocks that
sometimes is a cairn is your marker for the runnable trail that takes you to the top of Ormes. Be
careful coming off the summit on this short out-n-back, as it is easy to inadvertently head down
another trail that goes west. Once you get back to FS 302, you can bomb it north…till it runs
into a dead end.

Here’s where it gets fun-ish. Contour the ridge and bushwhack down to a creek that may or
may not have water. Keep heading due north through the burn scar. Wear your worst clothes.
You’re gonna get poked, scraped, and generally assaulted by this area. Lots and lots of downed
trees to contend with. Once you reach the living forest, follow yet another ridge north down till
you hit Monument Creek FS road. Knowing you’ll eventually be heading west, you may
gravitate northwest. Don’t do it. You’ll cliff out on some crags or get in a gully of a boulder field.
Maybe there is a way to cheat this corner/turn, but I never found a clean way. If you hit the FS
road juuuust right, you’ll see a 713 sign that takes folks on a trail north. No, you are NOT
heading north on it. Time to stretch those legs and bash the knees as you run downhill east
along Monument Creek on this FS road, which is also called the 713 trail.

You’ll come to a dead end with a towering 250-foot ground-up crag in your face. You’ll need to
cross the stream to your right at this clearing. Follow a faint trail along scree for 200 yards. Do
not go down to the creek! Once you see a gray drainage pipe and a black water line, then head
down to the creek and cross it. After that, carefully climb over rocks and boulders as you
bounce from faint trail to no trail. Eventually, you come to another scree-sloped trail just after
some railroad ties on a slope to your right. Do NOT follow the trail back down to the creek.

Although it will eventually get you to the east end of trail 713, it will be slow and arduous. Head
up a washed-out trail/road from the scree slope. A yellow forest service sign is partway up
letting you know you made the turn left correctly. You’ll connect to a FS road that takes you to
the end of 713 and opens up onto Air Force Academy property.

Make a right onto a paved road. You’ll see a very deliberate warning sign to not go down the
road to the water treatment plant. Hang a right up a dirt road and you are in the clear. Once
you get to the top, you’ll run into another warning sign and a gate that leads to the fenced-in
reservoir. About 40 feet before this gate, you’ll see a trail going up a slope marked by a small
cairn that swings around this fenced area. Follow a trail that is west of this reservoir all the way
around till you reach a steep dirt road. Climb this road till you hit the Academy’s South
Perimeter Trail. Just FYSA: Although this trail around the reservoir is not officially named, I had
assurance from the AFA visitor center that as long as I stayed on it heading south to the AFA
South Perimeter Trail, I was fine.

Run the South Perimeter Trail till you come to a green gate. It is unlocked and you can pass
through it, but close it after you go through. There is a horse stable on AFA near this road, and
many horseback riders ride it, so please be aware that you need to yield to them. Now, if you
look at AllTrails guide, you’ll see a trail that heads due south from the gate to the subdivision
property. You used to be able to pass through it easily. Not anymore. Ever since there was a fire
at the base of Blodgett Peak this spring, the gate has been closed up.
Head east a half mile till you see a well-defined trail heading south to the AFA/subdivision
property line. Look for the basketball court in Marshall Sprague Park for a landmark. That’s
where everyone crosses.

So, I do have a caveat to AFA property. Although the public can use their trails, every so often
something throws a rock into that public access. They may close a trail for maintenance. Think
Sante Fe Trail as an example. Maybe there is a base exercise or some other reason (like 9/11)
they don’t want people on base or using their trails. Ninety-nine percent of the time, you are
fine. In theory, you could even start this outing by parking at their Stanley Canyon Trailhead.
Either way, it doesn’t hurt to check the AFA website ( https://www.usafa.edu/visitors/hiking-
and-biking-trails/ ) for any restrictions before you head out.

The rest is easy. From the park, hit the sidewalk along Woodmen Road, turn right, and sprint
back along the road to the Blodgett Peak trailhead where you started. Way more interesting
than taking the crappy trail to the top of Blodgett Peak.

A small tip: Don’t attempt this till late spring, or do it early fall before it gets cold. Monument
Creek is entrenched in north-sloping territory and holds snow and ice for a long time, making it
rather treacherous when it gets socked in. 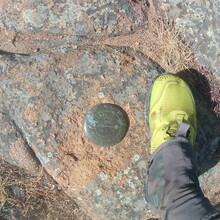 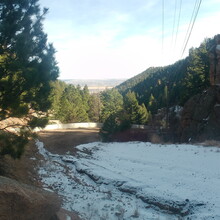 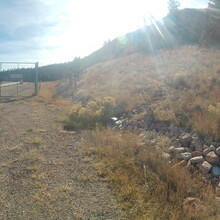 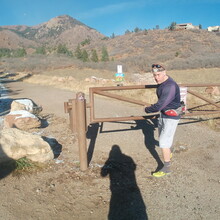