The Cerro San Ramón corresponds to the highest mountain in the Sierra de Ramón, visible from almost the entire city of Santiago, which gives the capital a special identity and that with its presence, height and imprint, give it a very special identity to the capital of Chile.

I have been climbing this mountain since I was in school, in fact the first time was with my brother and a friend, and it took us 12 hours to reach the summit, camping up, it was really a spectacular experience.

In relation to the day of the record, I began the ascent 8:49 am, from the Quebrada de Macúl Park (880 masl), to the summit of Cerro San Ramón (3,253 masl, 2481md +), with the intention of improving the previous mark of 2h49 'and to also exceed the height segments of the mountain recorded in Strava. After a lot of preparation, many previous ascents, and better knowledge of the route, I undertook this challenge, starting with only 500 ml of isotonic plus gels and protein bars, to Agua del Maqui (6km, 850 md +), reaching that point in 58 minutes. I loaded 1 liter of water, made isotonic juices and advanced with force, for 1h18 'to arrive at Cajón Del Muerto (1990 masl), and cross it on the eastern route, for in the final section of it I get off a bit of the most marked path to go direct to join the route at 2480 meters above sea level. From there comes the steepest sector, which ends at a ridge called La Puerta (2740 masl), reaching that point in 2:05 '.

From there you continue along the edge directly to the east, with the San Ramón in front, and after some steep slopes you face the last climb that requires you to go to the maximum of your energy, reaching the summit of this mountain so emblematic of Santiago, the Capital of Chile, in 2h43 minutes. Happy grateful for life, God, my family and friends. 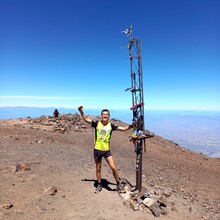 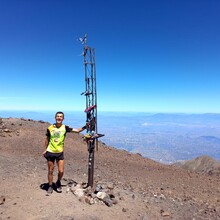