On the back doorstep of nipaluna / Hobart, there are two epic and fully independent skyline ridgelines which are separated by a 900m deep river valley - Collins Bonnet, and Montagu Thumbs / Cathedral Rock. This route links them both up including Mt Montagu.

A point to point traverse with a 1.5hr drive between start and finish points, this is an epic, exposed, steep and very challenging mainly off track route.

Starting at Myrtle Forest, head up the well maintained Myrtle Forest then Collins Bonnet tracks to East West Trail, immediately crossing and going off track on the Collins Bonnet ridge line. Traverse the ridge south to the trig station and enjoy the epic views worthy of the 700m climb, then continue traversing the ridgeline, scrambling down the eastern side of the cliff bands following the ridge proper. Some scree slopes make the going easier and only after those, head down slope towards the river - potentially an old log slide track here. Don't head down to the river too early as steep landslide affects slopes would be sketchy and not required. Wash off and cool the legs from the 900m descent - and prepare for the next 700m ascent.

Cross Mountain River at/below Montagu Creek and follow the ridgeline up to Mt Montagu - the northern aspect of the ridgeline was slightly less scrubby. There is a very faint route south east off Mt Montagu to join Old Montagu Trail but is hard to find. Alternately, use the better marked track heading somewhat north east once off the summit in a south easterly direction. Now you're back on tracks which should all be pretty well maintained - Old Montagu Trail, Montagu Thumbs Traverse (the equal most epic skyline traverse on kunanyi) then Cathedral Rock track to the carpark and enjoy a swim in NW Bay River. 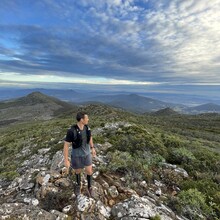 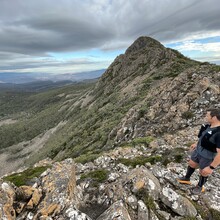 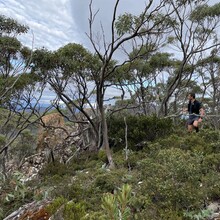 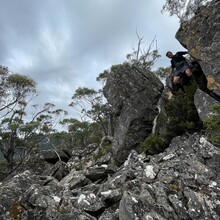 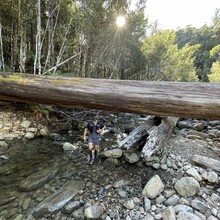 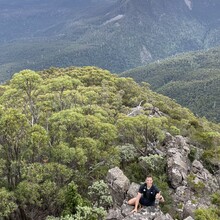