This historical tour was submitted by Dick Jones:

Start at Pegasus Bridge, run all D Day beaches, Sword, Gold, Juno, Omaha finish at Utah beach where approx 45,000 British and Allied troops sacrificed their lives so that we can live our lives the way we choose today, respect to them!

The start is Pegasus Bridge Memorial because this is the start of the D Day invasion where the British Paratroop Regiment landed and took control from the German occupancy, fierce fighting on all the landing beaches then commenced for approx 80 days and claimed the lives of approx 45,000.

This is covered along all the beach landings,

The finish is at the American war memorial at Utah Beach.

Significance, 75 years since the assault landings and this whole section of beaches is where the British and Allied forces infiltrated Adolph Hitlers Atlantic Wall.

the memorials along the whole section of thee landings are very powerful and a stark reminder of the devastations of war. 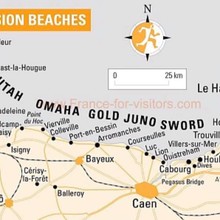