The East Coast Greenway is a ~3000-mile bicycle route that traverses the length of the US East Coast, from Maine to Florida and passing through many other states. It is still "in progress" as there are still some sections where the route follows roads. 35% of the trail is complete - that is, protected, off-road greenway. A full map of the Greenway can be found here: East Coast Greenway Map

The section in Delaware is ~37 miles, approximately 70% of which is "complete". In late 2021, a side path off of Elkton Road was finished, adding 1.5 new miles to the completed Greenway.

In Delaware, going North -> South, the Greenway starts with 4 miles of road before turning onto the Northern Delaware Greenway, a paved trail that meanders through the City of Wilmington and its surrounding parks and suburbs. There are excellent views of the Brandywine Creek, as the trail nears downtown Wilmington. Approximately one mile of road through downtown Wilmington connects travelers to the Wilmington Riverwalk, with scenic views of the city and the river. The Greenway then continues south onto the recently completed Jack A. Markell Trail (typically shortened to "The J.A.M.") for 5 miles before entering the City of New Castle, where over a mile of pathway in Battery Park follows the Delaware River. Approximately 10 miles of road, with frequent sidewalks and side paths, connect the Greenway to the City of Newark. The 2-mile James F. Hall Trail then takes travelers through downtown Newark (home to the University of Delaware) passing by a few of its great parks. Less than a mile of neighborhood roads then bring the Greenway to follow the newly completed 1.5-mile Elkton Road side path, to then cross the state line into Maryland.

There are not always sidewalks on the road sections, and there are many road crossings which may require up to two minutes of waiting. Additionally, there are two places where the route crosses train tracks in New Castle; be aware of this when attempting to run or bike this section. Additionally, the route is not marked everywhere; I recommend navigating using either my GPS tracks, or the East Coast Greenway map linked above. 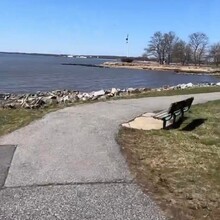 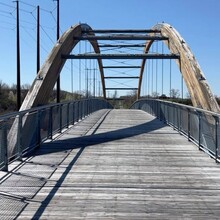 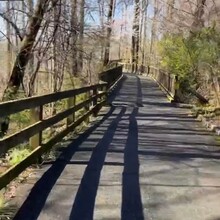 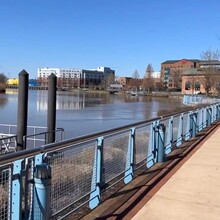 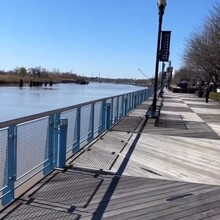