The Thru-Swim/Run of the Enchantments Traverse could be viewed as a variation of the existing route Enchantments Traverse. It involves the thru-run of the traverse, with the addition of swimming through the five lakes that the trail most directly runs alongside (i.e., Colchuck, Inspiration, Perfection, Upper Snow, and Nada). Lakes that would require deviating off the main traverse trail are not included in the thru-swim/run route. Swim distance is about 2.5 miles. Run distance is the remaining distance, so about 16 miles. For a total of 18.5 miles of swim-run.

The description is organized around the five lakes at the heart of this route.

1. COLCHUCK: The trail begins at the Stuart Lakes Trailhead at 3463 feet of elevation, and climbs steadily for 3.9 miles to arrive at Colchuck Lake (5600 feet). The trail comes right up to the water in a cove along the east side of Colchuck Lake. This begins the first of fives swims for the day. Enter the water here and swim toward Aasgard Pass, exiting the water 900 yards later at the lake's southern end where you once again pick up the running trail.

2. INSPIRATION: Begin to climb the formidable, rocky, and steep Aasgard Pass, following the cairns as you do. You will reach the highest point of the day (over 7800 feet) at the top of the pass and begin to descend toward the second swim of the day. While you will see other beautiful lakes along the way, the trail does not come close enough to the lakes to make geographic sense to advance along the route via water/swim. The trail takes you to the SE corner of Inspiration Lake (mile 7.2) where you will enter the water and hug the eastern shore for an exit at the far end of that shore, about 300 yards of swimming later. There you pick up the running route once again. On this particularly day, the lake was the second coldest lake along the route.

3. PERFECTION: Very soon after you will find yourself at the northern end of Perfection Lake (mile 7.6) and though the water is shallow, the swim begins there and crosses over to and then runs alongside the eastern shore. Take a left turn to hug the shore into the cove and exit the water before you hit the land mass that separates Perfection from Sprite Lake. This swim is about 500 yards. Pick up the running trail again.

4. UPPER SNOW: Staying true to the traverse trail, you will pass Leprechaun Lake on your right, and Lake, Viviane on your left, but again since the direction of these lakes would not advance you further along the traverse trail, still to the running trail and continue to descend to the biggest swim of the day, Upper Snow Lake (mile 10.3). The running trail arrives at the SW corner of Upper Snow Lake. Enter the water and aim for the for NE corner, nearly a mile in the distance (~1400 yards). This lake was similar to the temperature of Colchuck and Perfection, but unfortunately the winds provided for some unfortunate and surprisingly challenging chop. Less confident swimmers might wish to hug the entire eastern shore as an act of caution. I wish I had done so, even if it would have added to the distance of the swim, the chop would have been kinder.

5. NADA LAKE: From the trail along the NE corner of Upper Snow Lake, continue to descend toward Nada Lake in the distance. This was the trickiest lake to enter safely. Nada Lake appears to have two main sections connected by a shallow section. Enter about halfway up on the west side down a set of boulders at mile 12.3 (see one of the pictures included). Swim from the southern half of Nada Lake, cross the shallow connector, and enter the northern half of Nada Lake. Exit in the cove on the western shore (about 500 yards from where you jumped in) on a nice, welcoming (and flat-ish) granite shore. Be sure to exit before you hit a wooded area further up the western shore. Exiting there would potentially harm the flora and likely you too! Note that Nada Lake, at just 4930 feet of elevation, is the lowest of all the lakes, but by far (and I can't emphasize this enough) the coldest. If any scientists can explain that to me with sources, please do. If you run into trouble with the cold as I did, you may wish to swim from rock to log to marsh to stand up and thaw out along the way.

Home stretch to Snow Lakes Trailhead: From here (12.7 miles) to the end of the trail (18.5 miles), enjoy the long, rocky run down. The last few miles are far from a water source, so be sure to fill up when you cross Snow Creek around 14 miles.

Final note: Caution should be taken, as there are no lifeguards or other swim safety features in any of the lakes, and the cold water temperatures increase safety risks. And finally, thank you to Eric Yan for the support as we worked to establish this Thru-Swim/Run of the Enchantments Traverse. 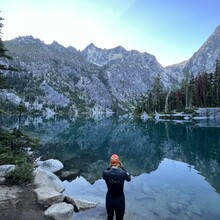 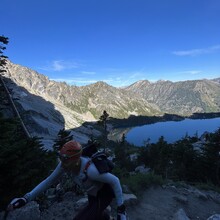 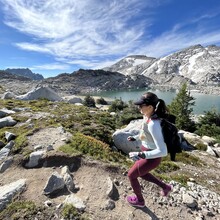 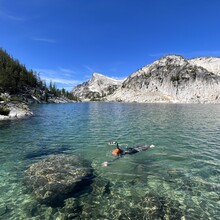 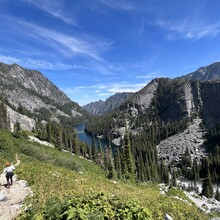 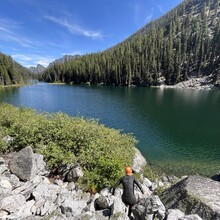 Congratulations on an incredible FKT! This route is particularly close to my heart as it was originally conceived of and completed in 2019 by myself, Clare Olson and Isaac Wilson. We scoured pretty thoroughly but could find no record of anyone completing a similar route to ours before us. Your time is so fast!