The Grand Sawtooth Loop (sometimes referred to as the Sawtooth Lake Loop) is a 75(ish) mile route that starts and ends at the Grandjean trail head in the Sawtooth mountains of Idaho. This route connects many of the high alpine lakes, and the razor sharp peaks that this range is named for. This is a very remote region of central Idaho, and besides a small section near the start/finish of this route it is entirely within the wilderness boundary making the potential for support extremely difficult.

I've searched through several Idaho backpacking/hiking guidebooks, but never could find any mention of a Grand Sawtooth Loop, but many people I talked to seemed familiar with some kind of long Sawtooth Loop starting at Grandjean. Searching online, I found several trip reports of a Grand Sawtooth Loop, or Sawtooth Lake Loop, but most of them were different routes. I mapped this route out as what I felt navigated to some of the highlights of the Sawtooths, while still maintaining a logical loop. A few longer versions I saw went passed some of the more interesting interior of the range, while shorter routes didn't seem worthy of being called "Grand."

Starting at Grandjean, this route then takes the Trail Creek trail (453) to the Iron Creek-Stanley-Lake trail (640). From there it connects to the Alpine way trail (528), and then takes the Iron Creek trail (640) up to Sawtooth Lake. Once at Stanley Lake it connects to the North Fork Baron Sawtooth Lake Trail (478). After going down to Baron Creek, take Baron Creek Trail (Trail 101) up to Baron Lakes. This trail continues up and over the pass above Baron Lakes, and down to Alpine Lake, and after intersecting with Redfish creek, take the Redfish Lake Creek Trail (154) up to Cramer lakes, and up and over the pass to Hidden Lake. After Hidden Lake this trail leads to 10 Lake Basin, and you take the South fork Payette trail (452) for a short bit to the 10 Lake Basin trail (482). After reaching Ardeth Lake, you'll take the connecting trail (463) up and over the pass to Spangled Lake. After going around Spangled Lake, take the Benedict Creek trail (462) around Lake Ingeborg and Rock Slide Lake and Benedict Lake and down the creek until it reaches the confluence near Smith Falls. At this point take the South Fork Payette Trail (452) all the way back to Grandjean. For a total of around 75 miles and somewhere around 18,400 vertical feet. 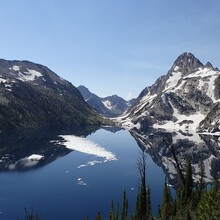 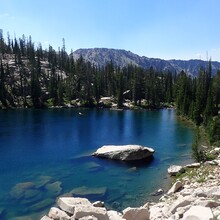 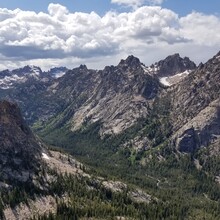 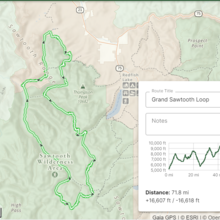