This is a difficult out and back trail to Horsetrough Spring in Cleveland National Forest, Santa Ana Mountains. The route includes the summit of Beek's Place and leads into Blackstar Falls and Silverado Canyon.

Total round trip mileage is about 20 miles. Trail descriptions below: Sourced by Jeff Hester in the following article:

https://socalhiker.net/hiking-beeks-place-via-black-star-canyon/
Mysterious ruins in a canyon that used to be home to grizzly bears? In Orange County? Yes, and getting there is a heckuva hike. This strenuous, 15 mile out-and-back trail up Black Star Canyon has several highlights, including a great views, a beautiful waterfall (in season), and the remains of Beek’s Place — a weekend getaway built by Joseph Beek in the 1930’s. Beek was remarkably accomplished and he started the Balboa Ferry — which his family still owns.

Black Star Canyon is rich with history and legend. Up until the late 1800’s, the canyon was home to numerous grizzly bears (none remain in California today). The canyon was home to the Black Star Mining Company, for which the canyon is named. And according to a story recounted by early settler J.E. “Judge” Pleasants, an armed conflict between American fur trappers, led by William Wolfskill, and a group of Tongva Indians occurred in 1831.

“
“The story of the battle, the bloodiest in the history of the Santa Ana Mountains, was told seventy years ago by William Wolfskill to J. E. Pleasants, and was repeated to us by Mr. Pleasants. The Indians were very fond of horseflesh. Ranchos were lacking in means of defense in the days when the missions were breaking up and Indians from the mountains and desert used to have no trouble in stealing herds of horses from the Spaniards. A party of trappers came across from New Mexico in 1831. Their long rifles and evident daring offered to the troubled dons a solution to their horse-stealing difficulties. Americans were not any too welcome in the Mexican pueblo of Los Angeles, and it was with a desire to please the Spaniards [Mexicans] in this foreign land a long way from the United States that the American trappers agreed to run down the Indian horsethieves.

Distance: 15 miles
Time: 6+ hours
Difficulty: Strenuous
Elevation gain: 2,750 ft
Dogs: Yes
When to go: Year-round
The trailhead begins — aptly enough — on Black Star Canyon Road. From Santiago Canyon Road, take Silverado Canyon Road. The first left is Black Star Canyon. This road ends at a gate, with ample free parking along the sides of the road. The gate is locked and access limited to local canyon residents and park service vehicles, but mountain bikers and hikers are permitted allowed pass through the gate and use the road.

At the 2.5 mile mark, you’ll cross Black Star Creek. This bend is also where you can take a spur to the base of Black Star Falls. This seasonal waterfall is best viewed after spring showers. To get there, you’ll have to pick your way along the creek for about .5 miles — there is no official trail.

Here you have a choice. You can stick to longer but gently climbing double-track trail (adds about .5 miles each way), or catch the steep single track shortcut. You’ll rejoin the main trail in .4 miles. Turn right and continue to follow the double-track trail upwards.

At the 4.5 mile mark, you’ll see a small single-track trail veering right towards the canyon. There are trees to provide much-needed shade (a good spot for a break) and signs of the Native Americans who used to live in the canyon.

Beek’s Place was a weekend retreat for the Beek family, who still owns the land. There was a smaller building where a caretaker sometimes lived for a few months during the year. Sadly, the retreat fell victim to disaster and vandalism, and ultimately it’s current state of disrepair.

There are two things you’ll notice about the location. First, the wind often howls over this ridge. Second, the views are awesome — especially on a clear day. You can see down into Corona and east to the San Bernardino mountains, and southwest to the Pacific Ocean and even Catalina Island.

Return down the double-track you hiked up. If water is running in Black Star Creek, take a detour to view the waterfall. There are two options. The first you’ll come to is a single track trail that heads east, straight down into Black Star Canyon. This is a fairly short spur down a sleep incline to the creek. From there, you can boulder-scramble downstream along a series of small waterfalls until you reach the top of the main waterfall. 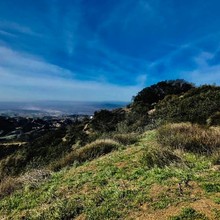 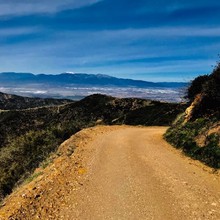 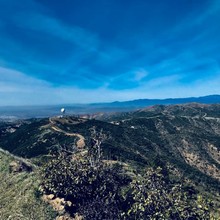 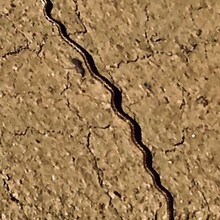 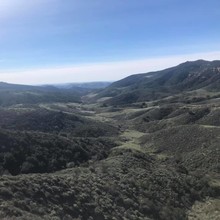 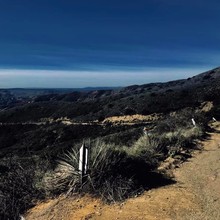 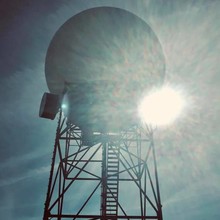 I went after it today and missed by 47 seconds. https://strava.app.link/0E5CCnTlIab