Established in 2012, the Kinder Loop has been developed by Peak Horsepower. It is a long distance bridle route, encompassing the Pennine Bridleway and the Transpennine Trail, along with short sections of  the Londendale Trail and Sett Valley Trail. It is suitable for any non-motorised mode of transport permitted on UK bridleways. It is particularly popular with walkers, runners, and mountain bikers.

The route encircles the Kinder Plateau in the North of the Peak District National Park and covers much of the moorland area of the High Peak District. It takes in the reservoirs of the Upper Derwent Valley, Howden Moors and Langsett, The reservoirs of the Woodhead Pass and Longdendale, and the classic ridge of Mam Tor overlooking the Edale Valley and the Kinder Plateau. This area is astoundingly beautiful and holds a lot of history. The mixed terrain is challenging and takes travellers across open moorland, through hidden cloughs and valleys, along lakeside paths, and visits local towns and villages. The scenery, and difficulty, changes with the seasons. One day could be glorious sunshine, and the next fog and freezing rain or snow!

The route follows that established on the www.peakhorsepower.co.uk website, using both their maps and route description. The route mainly follows bridleways and permissive paths, however, there is a short section around Glossop upon minor roads as at the time of publication the Pennine Bridleway was not complete. The route is circular so can be started/finished at any point and completed in either clockwise or anti-clockwise directions. However, the route described starts at the Derwent Overlook Car Park at the head of the Ladybower reservoir, and the route is described in an anti-clockwise direction. 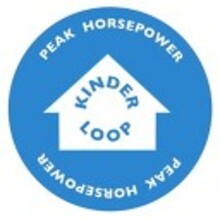 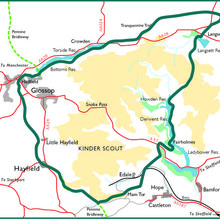