There are 2 options:  The traditional, U-shaped expedition route is a point-to-point from the highway at the Rio Eléctrico bridge and finishing at the National Park entrance at El Chalten.  For in-a-day runs, it may be more satisfying and logical to do a complete loop, which adds ~ 13km to the total distance.

"U" (78km / 2625m elevation gain):  The traverse begins at the Rio Eléctrico bridge, and enters a forest passing through Piedra del Fraile, and then crossing the powerful Río Electrico. From there it continues to La Playita, followed by a tyrolean traverse. There are two options to access Paso Marconi depending on the condition of the ice - to the left directly ascending to Paso Marconi, or to the right passing “Laguna de los 14” to reach the entrance of the Marconi Glacier. From that point it is another 20 miles on the ice field, navigating past infinite crevasses along the most remote part of the route. The most imposing point is in the middle of the Hielo Continental ice field, the famous amphitheater Circo de los Altares. Circo de los Altares is located near the border of Chile and Argentina, with the famous "big walls" of Aguja Standhart, Cerro Torre, and Torre Egger as a backdrop. After finding the exit from the ice field, you reach the Laguna de los Esquis, ascend to Paso del Viento, down to the Glacier Río Túnel, followed by another tyrolean traverse, passing Laguna Toro and finishing the route at the Los Glaciares National Park entrance.

"Loop" (88km /3050m elevation gain):  As above except you can start/end anywhere in El Chalten, and run all on trails (except for the short section of streets in the town).

On February 3rd, Fernanda Maciel @fernandamaciel_oficial and Kaytlyn Gerbin @kaytlyn_g, started from the Río Eléctrico bridge, 15km north of El Chalten, and via Paso Marconi and Paso del Viento arrived to the National Park’s visitor center, completing a version of “la vuelta al hielo” (the ice-field traverse) in an incredibly fast 13:15:11 hs. This version of the traverse covers 75 km with 2625m of vertical gain, and is the most common route followed by commercial expeditions. These are their blazing split times. Laguna de los 14: 03:30h; Paso Marconi: 04:18h; Circo de los Altares: 06:15h; Laguna de los Esquies: 8:30h; Laguna Toro: 11:05h.
.
Their traverse was supported. Seventeen kilometers in, at Laguna de los 14, they met with Miguel Andrade @miguecomodoro and Pedro Crespo @pedritocrespo, who had started two hours earlier carrying some of their gear (crampons, ice-tool, rope, inReach), clothing, food, and water - 4kg each. They also filmed, and navigated through the following 32km of glaciated terrain. At Laguna de los Esquies they parted ways, Fernanda and Kaytlyn left the gear they did not need anymore, and continued ahead with their blistering pace. Congratulations to Kaytlyn and Fernanda for the incredible achievement.
.
The previous FKT for this version of “la vuelta al Hielo” was 15h, done unsupported and solo in 2010 by Dave Turner, using skis and a kite. During their supported run for Fernanda and Kaytlyn, Miguel and Pedro completed it in 18h27m.
.
The FKT for the complete, closed-loop version of this traverse, starting and finishing in El Chalten, was done unsupported in 2011 by Sergio Camacho and Leonardo Proverbio @leonardoproverbio in 21h, in clockwise direction, running the vehicle road in the last 15km. In 2017, also unsupported but in counter-clockwise direction, and exclusively on trails, via Laguna Capri & Piedras Blancas, Tomy Aguilo @fitzroyguide and Germán Roberts @german_roberts, completed it in 21:02:49h. It is this last version of the traverse, 88km with 3050m of vertical gain, that seems the best suited to become the FKT to beat: a close loop, done all via trails. 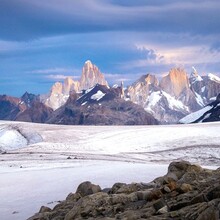