Named in recognition of the Lenni-Lenape, the original inhabitants of this area, the Lenape Trail offers an easy escape to treasured green space including forested reservations, hilltop meadows, stunning overlooks, and rushing rivers. Along the way, those following the yellow blazes will find historic landmarks, community gardens, and three parks planned by Frederick Law Olmstead - the famed designer of New York City's Central Park. The Lenape Trail also connects to larger trail networks including the Patriots' Path, the West Essex Rail Trail, and the Morris Canal Greenway, and is itself a segment of the Liberty Water Gap Trail that connects Liberty State Park and the Delaware Water Gap.

The route follows the map as published at the link below with 1 discrepancy. There is also an annual fat ass race called the Lenape Trail Run which takes place in early March - it can be found on ultrasignup. That race follows a mostly similar course, but there are some differences from the official route. Until this year's run (2019) that event did not include the Hilltop Reservation section, as it was recently blazed. Previous year's runs were a bit shorter, and the newly blazed section includes an additional climb (to the highest point in Essex county), and it is also more technical.
https://www.nynjtc.org/map/lenape-trail-essex-county-map

Details on the route:
*START: Near the corner of Clifton and 8th Ave. Just inside the park entrance at the corner there is a tree with the three blazes to indicate the start. Note - the Lenape Trail Run (LTR) starts at the Broad Street station - which is not blazed and not part of the official trail.
M12.2: The official map makes a R onto Upper Mountain Ave for a detour through Presby Iris Memorial Gardens. This seems like a new detour, but there is a trail post at the top of the park. The LTR route has gone straight up Laurel Place into Mills Reservation.
M17.2: Just past the entrance to Cedar Grove Park there is a paved path to the right - this path is included in the official map. The LTR route this year went straight up through the grass past the gazebo, bypassing that section.
M20.4: In Verona Park, the official map goes over the bridge towards the boathouse. I believe this is incorrect. The blazes clearly follow the longer route all the way around the lake, and there is even a large wooden blazed trail post near the South end of the lake.
M23.5: The official map follows the circle around the viewpoint and 9/11 memorial at Eagle Rock Reservation - this section is blazed. The LTR route cut off this circle.
M26.0: This is the biggest difference. The LTR route traditionally goes up the "Power Lines" hill next to Rt. 280. This is a fun section and something everyone who runs the event loves. At the top of the hill you follow a short stint of BLUE blazes back to the Lenape Trail. The official route does not go up the "Power Lines" hill - it follows the yellow blazes through some very steep residential streets.
*FINISH - Trailhead sign/map at the top of the Locust Grove parking lot (pictured). The official map seems to go down to the street, but it's a bit unnecessary to run through a parking lot.

*Course can also be done in reverse 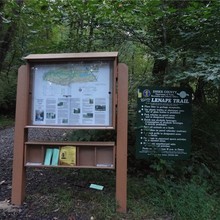 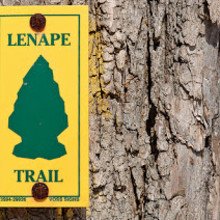