This route links up the seven major summits clustered to the south of Logan Pass in Glacier National Park. It's a difficult, extremely aesthetic trail running and scrambling adventure in one of the most beautiful mountain environments in the world. There are approximately nine miles total of trail, social trail, and class 2 off-trail movement. The remaining 13 miles or so (depending on the exact route taken) is class 3 scrambling punctuated by some class 4 sections.

Over a million people drive the Going-to-the-Sun road each year, and thousands upon thousands hike the trails surrounding Logan Pass, the central heart of the park and the highpoint of the Going-to-the-Sun road. These seven peaks are all visible from the road or after a short walk from Logan and are among the most-photographed and iconic peaks in GNP. But for all the people admiring these peaks, relatively few climb them because all require at least a bit of scrambling.

The peaks may be done in any order, but I believe Oberlin, Clements, Cannon, Bearhat, Dragon's Tail, Reynolds, and lastly Heavy Runner makes the most sense because you climb the Clements east couloir rather than downclimb. In that direction, you also finish with Heavy Runner, a relatively easy peak. Which is quite nice mentally at that point of the day.

The Logan Pass area sees tens (maybe hundreds) of thousands visitors each year, and off-trail travel in the immediate vicinity of the pass is prohibited (there are several signs up to this effect). So, we FKTers have a responsibility to be good stewards of the places we run through. Use the established climber's trail up to Oberlin. And though it may be tempting to straight-line down off the saddle between Clements and Cannon as you make your way towards Hidden Lake, DON'T DO IT! There is an established climber's trail that is well used and well-marked with cairns that leads to the Hidden Lake trail. Please use that climber's trail. Lastly, at the end after passing through the basin to the north of Reynolds, the route climbs back to the trail as soon as possible. Please do not cut cross-country due north there instead of using the trail.

The class 4 sections are the ledge system accessing the Clements east couloir, the couloir itself, a couple short sections as you access Bearhat from the south ridge, and the final few feet up to the Heavy Runner false summit. There is significant exposure on some of these sections.

Note that the north summit of Bearhat as detailed in this Summitpost entry is not the true summit. The true summit is further to the southwest, and this FKT climbs that true summit.

Also note that this FKT climbs the false summit of Heavy Runner, which is just west of the true summit and a few feet lower. Both the false and true summit have cairns. The true summit requires about 30-40 feet of 5.3 climbing, so in the spirit of keeping this FKT a running/scrambling adventure rather than venturing into climbing territory I've opted to use the false summit.

This route is beta-intensive and some of the more challenging scrambling sections are quite finicky, where it is difficult or impossible to tell which specific line "goes" without prior knowledge. The rock is often quite crumbly, as everything is in GNP. Be safe out there and always remember coming back home is more important than setting any impressive time.

Photos courtesy of Noah Couser, a friend and photographer in the nearby Flathead Valley, except the image of Bearhat mountain with the beargrass in the foreground, which was downloaded from Unsplash. 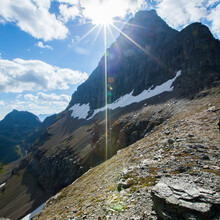 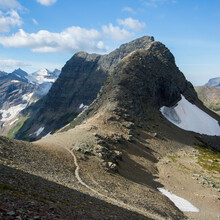 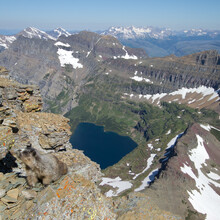 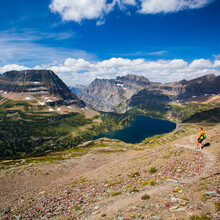 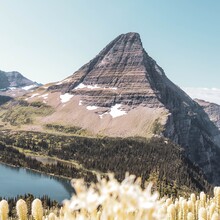