This is a beautiful, challenging route traversing two valleys and two passes that is only about 30 minutes outside the capital city of Tajikistan, Dushanbe.  The route begins in the village of Sayod, along the Luchob river valley.  There is a small bridge with an area you could park right by the river, but by driving another 500 meters or so you can park where the road splits to begin the loop. From here, you follow a small dirt road up half the valley as it winds along the edge of the valley with great views overlooking the river and down the valley. You are likely to run into a couple herds of sheep and goats along the way.  Halfway up the valley, when the path depends to near the river you should cross the river over a footbridge to continue along the right side fo the river.  (The bridge was new and not on our map, so we actually continued on the same side of the river, forcing ourselves to travers less accessible trail for 1-2 km then wade across the stream to get to the better path on the right side of the river.)

At about the 26 km mark you cross the stream again and turn to the left, setting off along a small stream bed toward the Kaynar (Ka-ee-nar) pass.  The stream bed will take you to the top of the pass, where you will descend to a small stream bed on the other side.  This path is not as well marked, but the stream can be followed easily.  This is continued till you arrive at the larger Hanaka river.  You continue along the left side of the river, generally staying fairly close except a few spots where steep inclines force the path to travel a little higher.  This path becomes a dirt road as you near the bottom and approach the village of Shamal, where you turn left at a dirt road that heads back over a pass back to Sayod, the starting point.  There is a small dirt road that can take you the entire way over this pass to Sayod, but some distance can be cut out by taking footpaths along the way that bypass some of the switchbacks up and down the valley.

This route, though challenging, has fairly easy to find landmarks for key turns and you can enjoy beautiful views and geological features over mountain passes and through river valleys.  It is also easily accessible from the city of Dushanbe. 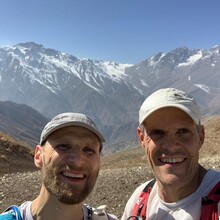 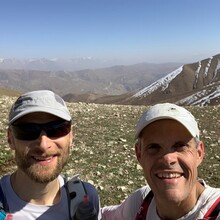 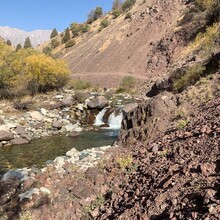 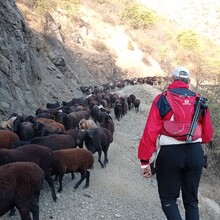