Sometimes described as Milwaukee's Hidden Central Park, this nearly eight mile route creates an escape from the city in the city. For most of these miles, there is little evidence of city life, and wildlife are more commonly seen than buildings. You'll run through several parks, often without even realizing they're just above you on the ridge.

The Greenway is a dirt and gravel trail that hugs the Milwaukee River as it meanders south from Port Washington Road and Hampton Ave in Glendale through Whitefish Bay and Shorewood into the City of Milwaukee. It's southern most point is a paved bridge across the river (with views of downtown). The trail then returns north. You'll almost certainly encounter patches of mud on both the East Bank and West Bank. Much of the East Bank is gently rolling single track with off-shoots that usually come back together: one goes high and the other cuts closer to the water. The hardest area for navigating on the East Bank is the grassy openness of Hubbard Park where it's tricky spotting the trail back up into the woods. Shortly after this, the trail pops out onto the paved Oak Leaf Trail, but the next gap in the trees returns you to the Greenway trails. The final mile before the bridge widens to accommodate passing, incorporates more gravel, and flattens out.

However, more single track awaits on the West Bank despite the trail resuming across the river's floodplain. This section is often overgrown late in the summer and resembles a deer trail more than single track. The final half mile is similarly overgrown, but seeing the parking lot that ends the trail. gives you an idea of where to go. Between these sections of seasonal overgrowth are more technical, dirt single track, and at the northern end, there's a bit of gravel and open space. Be careful to know the single track on this bank because very few of the other trails reconnect as they lead up to buildings hidden in the trees or down to the water's edge. The parking lot at the northern end of the West Bank is technically for a restaurant and hotel, but there is street parking on the East Bank near the trail head. 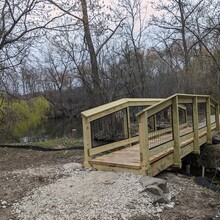 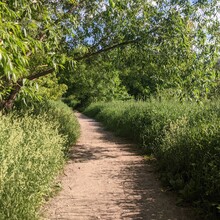 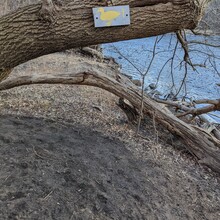 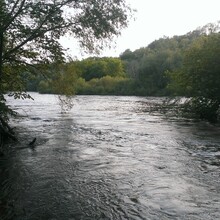 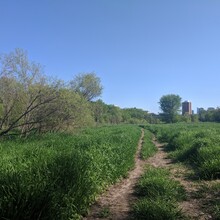