The Swiss canton of Obwalden sits at the center of the country and is part of the Old Swiss Confederacy, said to have formed in 1291. Its current borders define two non-contiguous regions; this route describes an aesthetic loop around the entire larger, western part, winding through mountains high above Lake Sarnen.

The route is is mostly between 1000 and 2000m, over steep green (in the summer) mountains, covered with cow pastures. The full loop is approximately 125 km long with 7500m of climbing.

Most of the route follows the Obwaldner Höhenweg, Swiss Regional Route 57, which winds over and past many of the attractions of the area: fantastic folds of exposed rock, knife-edged ridges, cows (lots of cows), alpine lakes, views of snow-capped peaks, and more.  In typical Swiss style, the official route starts and ends at enormous cable car stations on the tops of mountains, catering to rich tourists: Pilatus and the Stanserhorn. You'll notice a strange non-direct wiggle in the southeast where the trail leads you through Älggi-Alp, the geographic center of the country (so it's no coincidence if your GPS track cuts through the "e" in "Switzerland"!).

The FKT route is easy to describe - simply connect the endpoints of the Obwaldner Höhenweg to complete a loop. There are several ways to do this on high quality, marked hiking trails.

The route features a good deal of elevation change and varied surfaces, from paved and dirt roads to airy ridges to root-choked forest ruts to stone pathways to a couple of short sections with fixed cables/ropes. It is well marked but at night there are places which which would require a powerful headlamp to see somewhat-distant trail markers.  There are several hotels, restaurants, and shops along the route, which provide options for self-support, and several road crossings, cablecars, and access trails which provide options for full support.

For more information on the route, see the description on the SwitzerlandMobility website,

(Note that at the time of this writing, the elevation profiles linked to on the website correspond to an older version of the route which ended at Eggen, not the Stanserhorn. The FKT route here includes Route 57, as of September 2020, to the Stanserhorn.) 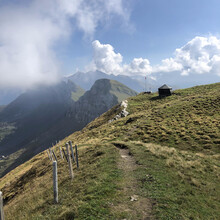 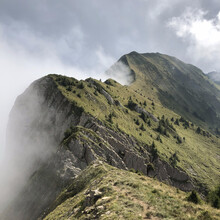 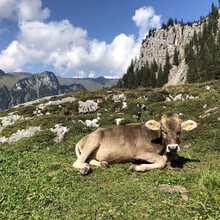 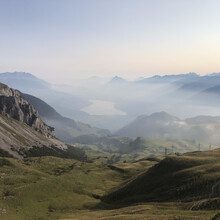 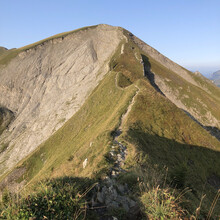 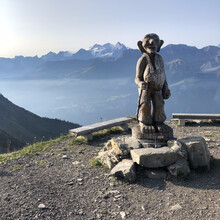